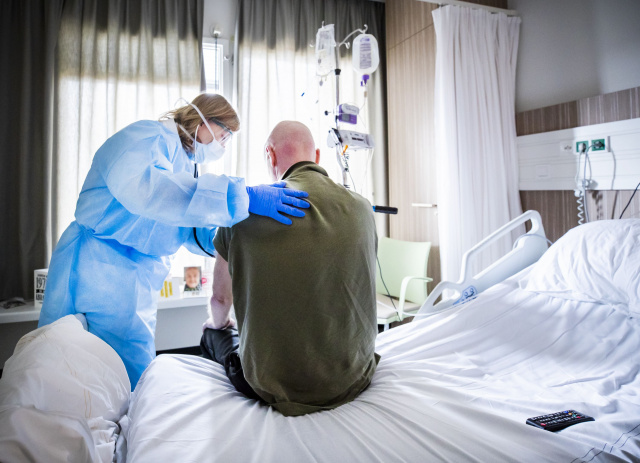 An attending physician listens to the breathing of a patient who is recovering after admission to an intensive care unit (ICU) in the coronavirus (COVID-19) patient nursing department of The HMC Westeinde Hospital in The Hague on April 4, 2020.(Remko DE WAAL / ANP / AFP)

The UN's health agency along with partners Nursing Now and the International Council of Nurses (ICN) underscored in a report the crucial role played by nurses, who make up more than half of all health workers worldwide.

"Nurses are the backbone of any health system," WHO chief Tedros Adhanom Ghebreyesus said in a statement.

"Today, many nurses find themselves on the frontline in the battle against COVID-19," he noted, adding that it was vital they "get the support they need to keep the world healthy."

The report said that there are just under 28 million nurses on the planet.

"But this still leaves a global shortfall of 5.9 million," the WHO said, pointing out that the greatest gaps were in poorer countries in Africa, southeast Asia, the Middle East and parts of South America.

The report urged countries to identify gaps in their nursing workforce and invest in nursing education, jobs and leadership.

ICN chief executive Howard Catton told a virtual briefing that infection rates, medication errors and mortality rates "are all higher where there are too few nurses".

In fighting the pandemic, Mary Watkins, who co-chaired the report for Nursing Now, called for urgent investment in virus tests for healthcare workers.

"We have a very high proportion of healthcare workers not going to work because they're afraid that they've been infected and that they can't prove that they have not got the infection -- or that they've had it, and they're over it," she said.

Catton said that 23 nurses had died in Italy and cited figures suggesting that around 100 health workers had died around the world.

Meanwhile he said there were reports of nine percent of health workers being infected in Italy and "we're now hearing of rates of infections up to 14 percent in Spain".

He also cited reports of "completely unacceptable and reprehensible" attacks on health workers battling COVID-19, largely due to ignorance about their work, combined with countries not doing enough to protect them.

"COVID is putting it into a very stark lens for us all," he said, though he welcomed the growing appreciation in some countries of nurse's work.

Catton said that could help change perceptions of the value of nursing -- which in turn might help make it a more attractive profession.

Beyond COVID-19, Watkins said many wealthier countries were not producing enough nurses to meet their own healthcare needs, and were therefore reliant on migration, exacerbating shortages in poorer countries.

Catton warned of risks that richer countries would rely on the Philippines and India to "supply the world with nurses", which could lead to significant shortages in India.

"There is clear evidence that where there are more men in any profession in the world, the pay and the terms and conditions improve," Watkins said.

General » Be a reporter: Write and send your article » Subscribe for news alert
Tags: health, virus, nursing, WHO