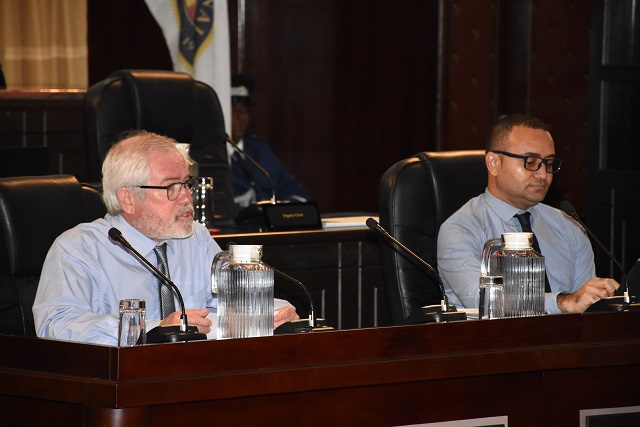 Maurice Loustau-Lalanne (left) presented a budget amendment to the National Assembly on Tuesday through the Appropriation Bill 2020. (Seychelles Nation)

(Seychelles News Agency) - Seychelles' funding priorities for 2020 have shifted due to COVID-19 and now must emphasise healthcare, food security, and job security, the Finance Minister said.

Maurice Loustau-Lalanne presented a budget amendment to the National Assembly on Tuesday through the Appropriation Bill 2020.

Notably, the government is cancelling several festivals and delaying the national census to 2021 in order to save money in a year when the government expects lower revenues because of the sudden and dramatic drop in tourism.

Despite the lower budget, there will be an increase of SCR50.6 million ($3.4 million) for the health sector in the amendment, compared to the 2020 budget, said the minister.

The money will be used to finance the construction of an isolation centre, carry out renovation on barracks at Il du Swet to increase actual quarantine capacity, and to complete other health-related projects. This is all being done in an effort to contain and combat the disease.

To address food security in the country, a sum of SCR20 million is being allocated to the Seychelles Trading Company (STC) to ensure the stocking of essential commodities.

In an effort to address challenges that the fisheries sector and farmers are facing, the government has taken a temporary decision to review the current levy on imported meat, with the aim of increasing it.

The Minister continued in saying that "a sum of SCR 1,09 billion (over $73 million) has thus been proposed in the 2020 budget amendment to guarantee salaries."

Salaries will be guaranteed for three months as announced by the President of Seychelles, a group of 115 islands in the western Indian Ocean.

"However, in view of the uncertainty of this pandemic, we have made provisions to cover salaries for at least six months. Assistance will be limited to an individual ceiling of R30,000 ($2,040)," said Loustau-Lalanne.

The government will be cutting non-essential spending across most ministries, departments and agencies by introducing measures such as placing a freeze on recruitment, restricting travel and reducing allowances.

Costs are also being saved through the cancellation of cultural and national events such as the Creole Festival, National Day, the 250th Anniversary of the First Settlement and participation in international sports activities. Namely the Olympic Games, Jeux de la Francophonie, Table Tennis and the regional sailing competition and international swimming events scheduled for May and July.

The Minister added that the census scheduled for this year by the National Bureau of Statistics will also be postponed to next year.

Members of the National Assembly will respond and debate on the budget amendment as from Wednesday.