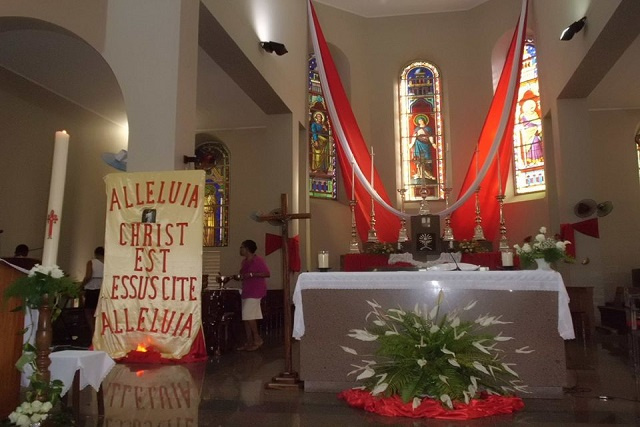 (Seychelles News Agency) - Easter, also referred to as the Feast of Resurrection, is among the most important days of the year for Christians, as they commemorate the resurrection of Jesus from the dead three days after his death from crucifixion.

In Seychelles – 115 islands in the western Indian Ocean, where more than 80 per cent of the population are Christians -- special attention is put in the spiritual aspect and other preparations for Easter Sunday.

But due to COVID-19 this year, all public gatherings including religious ones are prohibited as the island nation is currently in a state of public health emergency. Easter will be low key. Easter mass will be aired on national media.

Here are six traditional activities not taking place with large (or any) crowds this Easter.

Palm Sunday is a feast that falls on the Sunday before Easter. The feast commemorates Jesus' triumphal entry into Jerusalem. Palm Sunday marks the first day of Holy Week, the last week of the Christian solemn season of Lent.

In Seychelles, the day is marked by mass where believers bring in their palms which are blessed. The blessed palms are then kept at the believer’s home.

The Paschal Triduum or the Three Days is three days between Holy Thursday and closes with evening prayer on Easter Sunday. It recalls the Passion, Crucifixion, Death, burial, and Resurrection of Jesus, as portrayed in the canonical Gospels.

Prayers and mass are said during these times and important activity is where the priests symbolically wash the feet of priests or parishioners just like Jesus did to his disciples. A sign of humility.

Way of the Cross procession

Attended by thousands, the procession is marked with prayers, songs and believers carrying the crucifix. Similar processions are also held in other districts on the three main islands of Mahe, Praslin and La Digue.

Many believers use Good Friday as a way to make personal sacrifices. One such way is to undertake tough and treacherous hikes to mountainous areas.

One very popular amongst locals is to Trois Freres – a mountain range overlooking Victoria – and featuring a white cross at its summit. The huge cross was erected by the Catholic Church as a wooden one in 1956. This was to commemorate the passage of Prince Philip spouse of Queen Elizabeth to the islands.

For many locals reaching the cross is the ultimate Good Friday sacrifice.

Held after nightfall on Holy Saturday, the ceremony of darkness and light is held at the beginning of the Easter Vigil Mass. The paschal candle, whose lighting symbolizes the resurrection of Christ from the dead is lit from the new Easter fire. The candle is then used to light other candles brought in by the parishioners.

In Catholic practice, during the Gloria at the Mass, the organ and church bells are used in the liturgy for the first time in two days. The lights in the Church which were off are turned on as the Gloria begins.

Mass on Easter Sunday is a fine affair. People in Seychelles attribute a lot of importance to the event where only their Sunday best is worn for mass. Churches are also beautifully decorated with lots of colours and flowers.

After mass, families get together where a sumptuous lunch is served and where gifts in the form of Easter eggs, and chocolates in other forms such as rabbits are shared and exchanged.