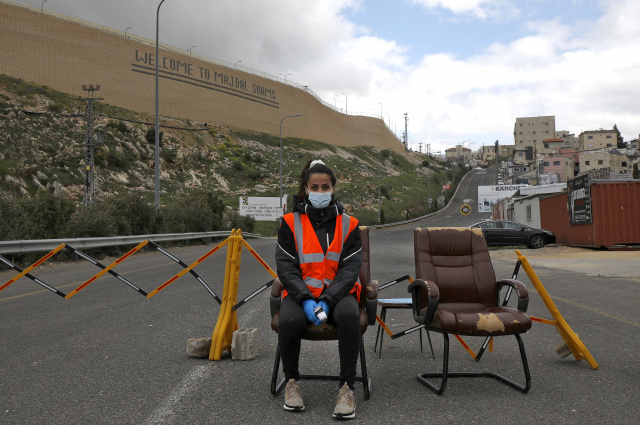 A woman stands next to a makeshift checkpoint, part of a community safety initiative in the Druze village of Majdal Shams in the Israel-annexed Golan Heights on April 9, 2020, amid the novel coronavirus epidemic. (JALAA MAREY / AFP)

(AFP) - Eggs on the table and a toy rabbit on the dresser -- with a few decorations, Palestinian Christian Sawsan Bitar attempts to salvage some normality from an Easter overshadowed by coronavirus.

In the Christian quarter of Jerusalem's Old City that Bitar calls home, roads are deserted and most shops have been closed for two weeks.

All cultural sites in the Holy Land are shuttered, regardless of their religious affiliation, as authorities seek to forestall the spread of the deadly respiratory disease.

Christians will be prevented from congregating for the Easter service, whether this coming Sunday -- as in the case of Bitar and fellow Catholic worshippers -- or a week later on April 19, in line with the Orthodox Easter.

Despite wars and uprisings, the Church of the Holy Sepulchre, built on the site where Christians believe Jesus was crucified and resurrected, has not been closed over Easter for at least a century, according to Palestinian historian Johnny Mansour.

Bitar, who is in her sixties, says it is "depressing" that she will not be able to celebrate Easter in church.

Israel -- which in 1967 occupied east Jerusalem and later annexed it -- has confirmed over 9,700 coronavirus infections, with 79 dead from the respiratory disease.

On the Palestinian side, more than 250 cases have been confirmed, with one death.

Jerusalem is usually the vibrant heart of global Easter celebrations.

Last year, more than 25,000 people gathered near the Holy Sepulchre to attend Palm Sunday mass, which marks the start of the Easter week.

This year, the cobbled streets of the Christian quarter were silent and its dozens of churches were empty for Palm Sunday on April 5.

A lookalike of Jesus, with long hair, a white tunic and bare feet, praying with his bible on the steps of the church of the Sepulchre, cut a lonely figure.

Behind the heavy wooden doors of this holiest of Christian places, there were only 15 members of the clergy in attendance, said Ibrahim Shomali, spokesman for the Latin Patriarchate in Jerusalem.

"But despite the difficult circumstances, there can be positives," Shomali told AFP.

This Sunday, Easter mass will be broadcast on television and on social networks.

Only six monks will be present in the church, Shomali said.

Watching the mass online will be the only way Francis Gharfah will celebrate Easter this year.

A Palestinian from east Jerusalem, he left his usual decorations in their boxes and chose not to prepare traditional pastries.

"The situation is dramatic," he told AFP, saying he fears for his job at an NGO due to the virus.

He was "very touched" by the images of Pope Francis celebrating Palm Sunday in an empty Saint Peter's Basilica, accompanied only by a few religious men and women -- each of them perched on separate benches.

"People are thirsty for spirituality," said Shomali, who finds great solace in a "return of faith" in this dark time.

"Everything happens for a reason. I hope that we will be different people, that we will appreciate things differently" once the coronavirus crisis ends.

To mark this Easter, Bitar laid out a cloth printed with small yellow chicks and multi-coloured eggs at the entrance to her home.

Her family has created an improvised photo studio, her daughter and grandchildren squeezing into pictures surrounded by a rabbit and flowers.

But all the photos in the world will not be the same as attending church for Easter.

"We live five minutes from the Holy Sepulchre and we cannot go there," she said sadly.

"It breaks my heart."