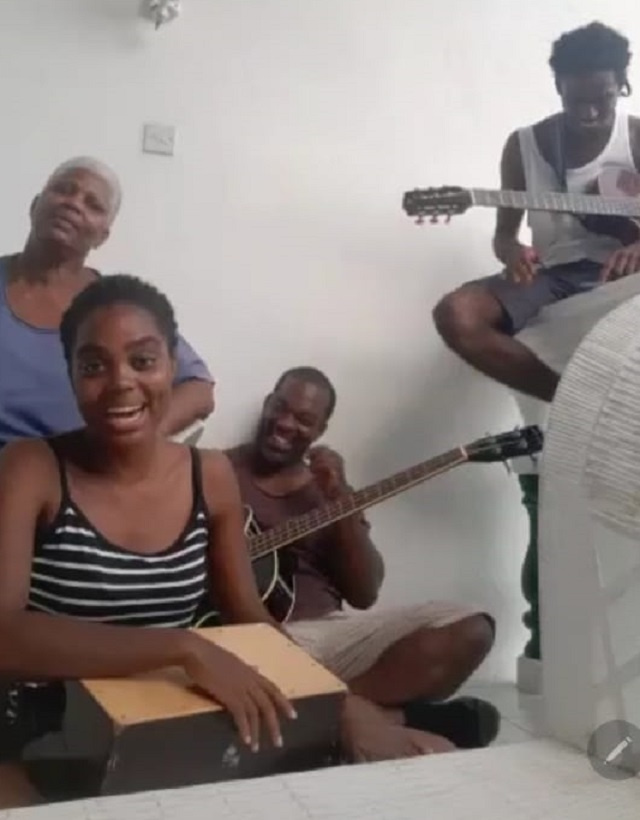 Uprising artist Isham Rath, along with his siblings Colin and Isis, and their mother Fleurange Dora, have jammed to a different genre of music such as jazz, country, love songs and even some Creole hits. (Isham Rath)

(Seychelles News Agency) - A Seychellois family is live-streaming gigs on Facebook every week to uplift the mood of the population and to help combat the "boredom" of self-isolation due to COVID-19.

Uprising artist Isham Rath, along with his siblings Colin and Isis, and their mother Fleurange Dora, have jammed to a different genre of music such as jazz, country, love songs and even some Creole hits.

Accompanied by Vicky Emile, the group has been going live twice a week since they started streaming a month ago. SNA contacted the family to learn more about this initiative and was able to talk to Isham and Isis.

"The initiative came about as we wanted to give people a bit of positivity, laughter, and emotion in the midst of the coronavirus epidemic, but it also helped us to stay positive," said Isham, the youngest of the family.

Isham added: "It's a time to not give up and think how you can use this situation to be creative. Out of bad situations and despair comes incredible art, no matter what form that may be."

Both Isham and Isis developed a passion for singing and music at a tender age. Their first appearance was on the national television interpreting a song by the late South African artist Brenda Fassie. This and their mother forming the Dove Choir – where they both performed along with other kids – launched their musical career.

The eldest of the siblings, Collin, is also a talented musician and for several years was active and part of a local group.

Their first music video attracted a large crowd of people, which Isis said was quite unexpected. "After a while of doing this, we thought that we would bore out people. But week after week when we come online we are seeing the same faces and newcomers," Isis explained.

Whenever the siblings take out their tambourine and guitar, they normally pull out a one-hour show, taking requests for songs from followers. Their mother and Vicky does the backing vocals.

"Sometimes people request for us to play challenging songs and we cannot play it right away as we have to learn it first.  When we come online we want people to engage. They can get on their bed, kitchen table or couch and sing along," said Isis.

SNA also spoke to some faithful followers of the live-streaming videos. Demelza Philoe said that since she is currently in hospital with her child she is enjoying the live sessions.

"It's like looking at a live band. It allows me to interact with friends who are also watching. The songs being played are some of my favourites, considering some oldies that I don't even have anymore," added Philoe.

On his part, Peter Roselie, who has trained and mentored many young entrepreneurs in developing their business, said that Isis and Isham formed part of his mentees.

"Today through their music, they have become my mentor. I am listening to their music whenever they appear online as a way to help me relax," said Roselie.

The siblings were also making a living from music, usually performing at hotels. Isis said that the closure of the hotels has taken a toll on their finances.

In this desperate and difficult time, music is surely seen as a way to loosen out and spread positivity.  The writer of this article also shared how in his neighbourhood a young couple is also using music to cheer up the community.

Two weeks ago, Shaun and Melisa Prea, who makes a living by renting out the sound system for concerts, took out their music system and at exactly 3 p.m, played 'Heal the World' by Micheal Jackson, with people in the neighbourhood cheering out.

Melissa said that "in this difficult time we need to unite together to overcome this situation. We would definitely be able to unite through music."