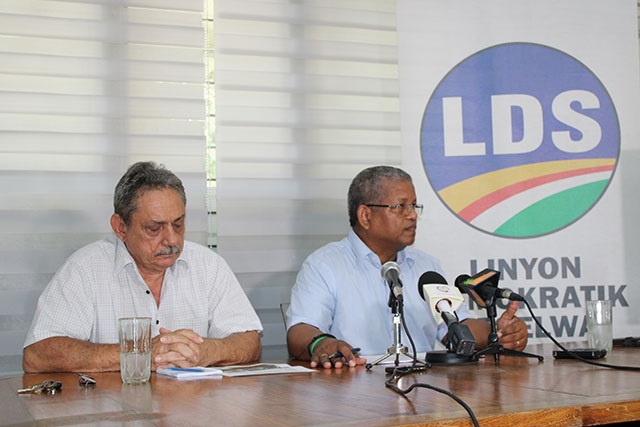 Ramkalan (right) speaking at the news conference in February following the incident at the airport. (Rassin Vannier, Seychelles News Agency)

(Seychelles News Agency) - A search carried out on the Leader of the Opposition in the National Assembly upon his arrival at the Seychelles international airport was unlawful, a commission of inquiry concluded in its report released on Tuesday.

The search was conducted on the luggage of Wavel Ramkalawan, who is the presidential candidate of the Linyon Demokratik Seselwa (LDS) party, when he returned from an official trip in South Africa on February 8. His diplomatic passport was also taken temporarily for verification.

The President of Seychelles, Danny Faure, set up a commission to investigate the matter and the conclusion was presented through a report by the head of the commission, Justice Fiona Robinson.

Ramkalawan told a press conference on Tuesday the most important thing is the conclusion which states that the search was illegal.

"It should have not taken place at all. Therefore it calls on the Anti-Narcotics Bureau to follow the law and regulations that govern them," he said.

The report said the ANB officer did not satisfy the test of reasonable grounds before the search was conducted on Ramkalawan and ordered that information pertaining to the unlawful search be expunged on the database of the police force.

The report also directed the Commissioner of Police, Krishnan Labonte, to write a letter to Ramkalawan to say that the order of the commission has been complied with.

"I am also expecting a written letter of apology from the Commissioner of Police. Meanwhile, I don't expect any disciplinary action to be taken with the officer as he thought what he was doing was right. The problem lies with the police for not having a clear structure," said Ramkalawan.

In his complaint after the incident, Ramkalawan said the search was premeditated, malicious and intended to smear his image. He also felt his rights were violated by the fact that he was not told why he was being stopped to be searched.

The commission said in its report that "the powers to stop and search without an arrest must be used justly, dutifully, responsibly with respect to the relevant fundamental rights and freedoms of persons being searched."

"ANB officers of the police force discharging their duties and performing their functions must have regard to the relevant written laws of Seychelles," said the report, adding that after having considered all the testimonies, it is clear that any abuse of power by an officer is likely to be damaging to policing and lead to suspicion of the police force.

The report urged the Commissioner of Police to respond positively and open a new chapter in the relevant policies, practice, and activities of the ANB with respect to the findings and recommendations.

Both the police and the ANB did not immediately respond to calls from SNA to comment on the conclusion of the report.