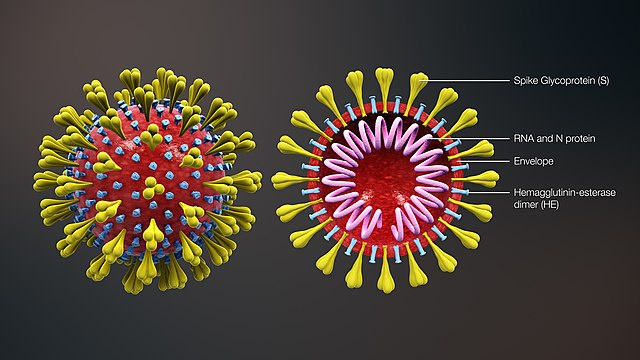 Eleven cases of confirmed COVID-19 have been recorded in Seychelles and no new cases have been detected since the one on April 5.  (Scientific Animation, Wiki images) Photo License: CC BY-SA 4.0

(Seychelles News Agency) - Five of the 11 people who had tested positive for COVID-19 in Seychelles have now tested negative for the virus, health officials said Thursday.

The five patients have left the isolation centre but are still being kept in quarantine.

“They are being kept in quarantine for observation for a week or so after which they will be discharged. But before they are discharged we will be repeating their tests just to be sure. So they are at Beauvallon Bay. And currently, there are six patients still in the isolation centre at the Perseverance Family Hospital,” the Public Health Commissioner, Jude Gedeon, told a news conference.

The chief executive of the Health Care Agency, Danny Louange, said: “Those in isolation are being given supportive treatment. The majority of them are not showing any signs of symptoms except for the last confirmed case who still has some coughs but this is on the minimum side. He was on oxygen but he is not now, so he is getting better,” explained Louange.

The doctor added that the Dutch national is also doing much better. Currently, there are 61 people in quarantine at the Berjaya Beauvallon Hotel and five in quarantine at the Coast Guard facility. It is expected that in the coming days some of them will be released if they do not show any symptoms.

The officials shared details of the latest medical donations from the World Health Organisation, the Jack Ma Foundation and the government of India.

“These donations are all important for us especially the one from Jack Ma Foundation which came with a consignment of laboratory supplies, including much-needed equipment for transporting specimens. This was important for us as our stock was depleting,” explained Louange.

On the issue of medicines donated by India, the medical team explained that the consignment includes a variety, from those used to treat chronic diseases including diabetes, hypertension, antibiotics and those needed in treatment for COVID-19.

The consignment included Hydroxychloroquine an anti-malarial drug being used by some doctors to treat COVID-19 patients, though clinical trials have yet to be carried out on the use of the medicine for COVID-19. Some doctors report positive responses in patients, but the World Health Organisation last month cautioned that the drug remains unproven

The Health Care Agency said that even though the country is in a state of public health emergency it is still keeping abreast with other essential services. The conditions of patients currently on overseas treatment was also discussed, where it was revealed that the agency is in constant and daily contact with hospitals.

One such hospital is the Madras Institute of Orthopaedics and Traumatology (MIOT) in Chennai, India where 25 Seychellois are currently following treatment. Louange gave his assurances on concerns raised by some patients at the hospital after they started to admit patients with COVID-19.

“MIOT is very clear about this and they will be admitting all of these patients in a different block separate from the block where other patients are, so they have assured us on their safety,” Louange explained.

Eleven cases of confirmed COVID-19 have been recorded in Seychelles -115 islands in the western Indian Ocean. There have been no new cases since the last case was detected on April 5.