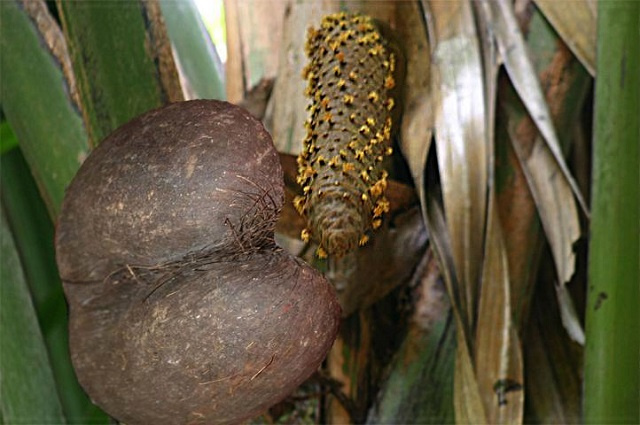 This is very important in the management of the species such that there should be no selective removal or planting of nuts of a certain shape to ensure that the palm is female or male. (Brocken Inaglory, Wikimedia Commons) Photo License: CC BY-SA 3.0

(Seychelles News Agency) - New research has revealed that the same amount of female and male seeds of the coco de mer trees are produced naturally and that both female and male trees exist in equal proportions in early life stages, meaning that selective planting is not needed.

The findings on the world’s largest nut will help put to rest some myths and mysteries around its reproduction. The newly discovered facts surrounding the sex determination of coco de mer trees was published in a research paper carried out by the Seychelles Islands Foundation (SIF) in partnership with Swiss scientists from ETH Zürich.

The research - initiated by Emma Morgan as part of her PhD programme in 2013 -- looked at several demographic and genetic processes underlying the regeneration of coco de mer.

The chief executive of SIF, Frauke Fleischer-Dogley, told SNA last week that the main result of this specific part of the genetic research has been that the ratio between female and male plants are equal at nut stage.

“This is very important in the management of the species such that there should be no selective removal or planting of nuts of a certain shape to ensure that the palm is female or male,” said Fleischer-Dogley.

Coco de mer, otherwise known as the Lodoicea, is unique to the 115 islands archipelago in the western Indian Ocean. Coco de mer is dioecious, meaning each plant is either male or female.

The nut grows naturally on only two of Seychelles’ islands. On Praslin, the second most populated island, in the Vallee de Mai special reserve which is also one of the two island nation's UNESCO World Heritage sites.

The plant can also be found on Curieuse Island, a national park located very close to Praslin. Its status as king of the palms and a giant in the plant kingdom makes it a major attraction for holidaymakers.

The research revealed that in most wild populations the adult sex ratio is not even. For instance, in the palm forests of Fond Ferdinand and at the Praslin National Park there are significantly more females than males, whereas in the Vallee de Mai there are more males.

According to Fleischer-Dogley: All coco de mer populations showing a certain bias towards one sex have been heavily impacted by human activities, for example, fire or selective harvest of the coco de mer for timber according to beliefs that the wood of one sex was superior.

“Also in the past, the commonly called coco de mer heart - the very young leaf which was not unfolded yet -- was harvested for craftwork. There is a possibility that these leaves were harvested selectively from male trees since any serious damage of the inner part of a coco de mer palm would result in its death,” explained the chief executive.

The coco de mer can take up to 50 years to reach sexual maturity and start producing flowers and until then it is impossible to visually distinguish the sexes. “For this reason, we have not known whether the skewed sex ratios in adults are due to different proportions of males and females germinating or to differing mortality rates in a later age,” said Fleischer-Dogley.

Rehabilitating certain areas to ensure a balance in the sex of the population is maintained in some areas is another advantage in the management of the plant species.

The research scientists developed a new method that allowed them to determine the sex of immature plants - something which has not been possible before. The authors screened almost 600 immature plants on Praslin and Curieuse and discovered that the two sexes germinated in roughly equal numbers.

In 2018, a three-month national census conducted where coco de mer trees are found, except for Curieuse Island, revealed that there are about 8000 healthy trees. The survey covered both government and private properties where trees grow. The census was undertaken by the Ministry of Environment to provide updated information to allow better management and ensure its survival.