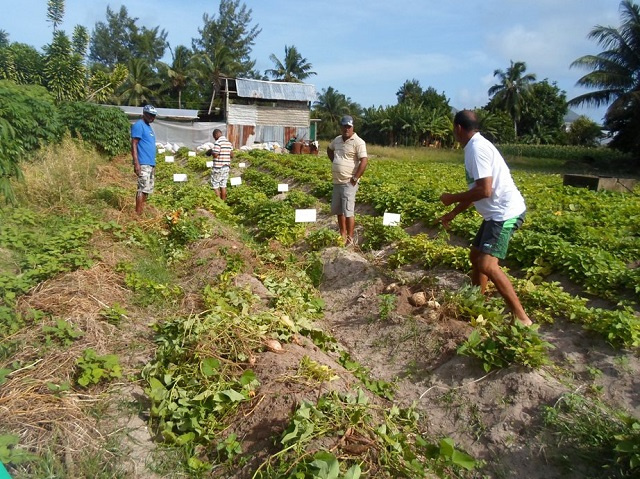 Increases in surface-air temperatures result in rainfall intensity which can cause significant losses to crops said Agricole. (Seychelles Agriculture Agency)

(Seychelles News Agency) - The rise in temperatures that Seychelles is experiencing will have a profound impact on the agriculture and fisheries sectors, two areas also being disrupted by the COVID-19 pandemic, a top official said on Wednesday, as the world observed Earth Day.

Increases in surface-air temperatures result in rainfall intensity which can cause significant losses to crops, Wills Agricole, the Principal Secretary for the Energy and Climate Change Department told SNA via email.

Agricole gave the example of the heavy rainfall experienced during the 1997–1998 El Nino and the 1998– 2000 La Nina which heavily impacted the economy of Seychelles, an archipelago in the western Indian Ocean.

"Fisheries are extremely sensitive to climate variability and change and it suffered the greatest loss in monetary terms accounting for 45 percent of the total losses, followed by agriculture," he said.

The situation has however been exacerbated with the COVID-19 pandemic, said Agricole, because "whilst agriculture and fisheries are inextricably linked to the climate, the COVID-19 pandemic has aggravated access to food in many parts of the world including Seychelles and has affected food security globally by upsetting local and global food production and by doing so, disturb access to food supplies."

He called on all Seychellois "to reinforce our efforts, big or small, to make a difference with simple and concrete actions that will help us fight against climate change."

According to the chief executive of the Seychelles Meteorological Authority, Vincent Amelie, in 2019 Seychelles saw an annual mean temperature anomaly of 0.6 degrees Celsius above normal, which is the highest since 1972.

The same year, Seychelles recorded an annual rainfall of 2,948 millimetres and "annual rainfall was 125 percent on average, making 2019 the second wettest year on record since 1972, behind 1997," said Amelie.

An increase in temperature also has an effect on the sea temperature and Jean-Claude Labrosse, the principal climate adaptation officer at the Seychelles' environment ministry, told SNA that this has a negative effect on coral reefs, which in turn affects fish stocks.

"One of the things that affect this industry is coral bleaching. Based on sea temperature that is rising, corals are dying which in turn means that fish move away as they use corals as their habitats and food sources. If corals die, the fish stock will drop as fishermen continuing to catch them," he said.

Fisheries is the second major pillar of the Seychelles' economy and contributes significantly to food security, a level of reliance which confers high vulnerability to climate change. The sector is dominated, economically, by the industrial purse-seine tuna fishery and production of canned tuna.

Agricole said with the COVID-19 pandemic "public health and food security have taken the highest priority in Seychelles. The government of Seychelles has to concentrate on the two main important things: the health of our citizens and food security."