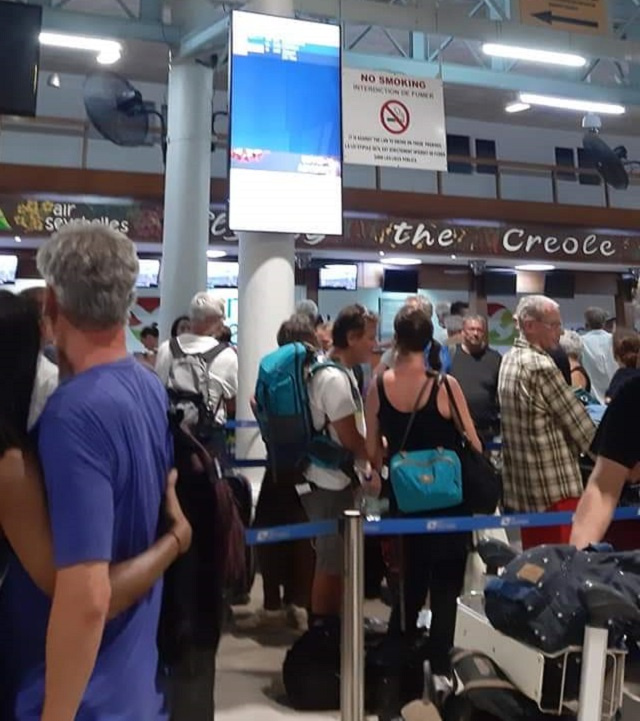 Visitors for a repatriation chartered flight to Europe on March 31. (French Embassy in Seychelles)

(Seychelles News Agency) - The government of Seychelles is aware that around 20 South African nationals in the island nation wish to return home, the Department of Foreign Affairs said on Tuesday.

The Department said that in view of current travel restrictions "the government has been working with various governments whose nationals are in Seychelles in offering them the option of repatriation under specified conditions and other possible forms of assistance to their nationals."

The government's main priority is to abide by the directives set out by the Public Health Commissioner during this public health emergency, the Department added.

Under new regulations issued by the Public Health Commissioner on entry to, exit from and return to Seychelles starting from April 17 "no person or class of persons shall enter into or exit from Seychelles except with the written authorisation of the relevant authorities."

Independent Media, one of South Africa's leading multi-platform content companies, wrote in an article last week that "what was meant to be a paradise island holiday has turned into a nightmare for a Cape Town family along with around 16 other South Africans who are stranded in the Seychelles."

It wrote further that "Nicola Kilner left Cape Town for the Seychelles for a holiday with her mom, husband and two children a week before the South African lockdown began. They were due to return home at the end of March, but their flight was cancelled, along with two others that were scheduled to bring them home. They've now been stuck on the island for a month."

"South Africa is ready for us to come home but the Seychelles government has said 'no one in and no one out', so they are effectively holding us hostage and not allowing us to return home," Kilner was quoted as saying.

The Seychelles' Department of Foreign Affairs said that "various forms of assistance have also been offered to these visitors through their consular representation, with whom the Department maintains active engagement."

The Public Health Commissioner, Jude Gedeon, told a press conference on Tuesday that a private chartered plane from South Africa was not allowed to repatriate five foreigners end of last week because it had not followed procedures in place.

"When I was informed Friday evening that a plane was about to land to repatriate a group of people I said that there was no authorisation given as per the new restriction order. They have to first seek permission and second send details of the persons leaving before the permit is processed," he said.

Gedeon said the control is in place because for all flights there are people to people contact and this poses the risk of the coronavirus being transmitted from one person to another.

He confirmed that the chartered plane has reapplied and the request is being processed.

Meanwhile the Department of Foreign Affairs "is coordinating its efforts with all relevant local authorities to ensure the safety and well-being of all residents in the country including foreign nationals during this difficult time."