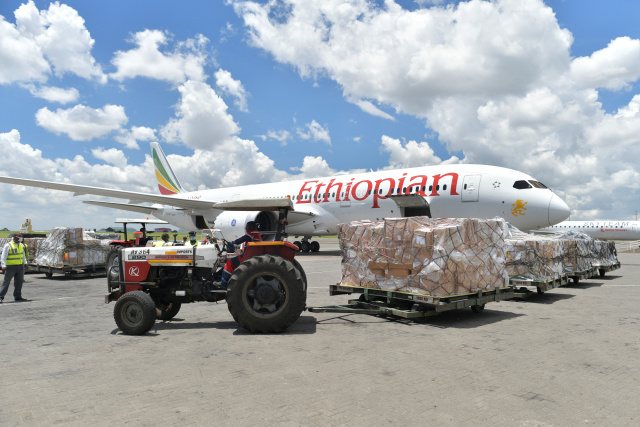 A consignment of masks, testing kits and protective gear, a donation from the Chinese billionaire and Alibaba co-founder Jack Ma, are unloaded from a cargo plane operated by Ethiopian airlines on March 24, 2020 after it arrived at the Jomo Kenyatta airport in Nairobi to help enhance capacity at the COVID-19 coronavirus infection testing centres in Kenya. As the global pandemic takes root in Africa, Chinese billionaire Jack Ma announced he was donating 20,000 testing kits, 100,000 masks and 1,000 protective suits to each of the continent's 54 countries. (TONY KARUMBA / AFP)

(AFP) - In early March, Ethiopian Airlines CEO Tewolde Gebremariam told an aviation conference in Addis Ababa the coronavirus pandemic was "a temporary problem" -- comparable to a natural disaster or a spike in oil prices.

Several weeks later Africa's largest carrier is locked in what Tewolde describes as "a struggle that we're performing for survival", ramping up cargo operations while seeking to defer lease payments on aircraft.

"To be honest with you, I had never thought that it would reach this stage," Tewolde told AFP in an interview this week.

"I had never thought that it would spread like this at this speed, and also in this magnitude. It is just too fast and too expansive and it's beyond imagination."

Across Africa, airlines stand to lose $6 billion in passenger revenue in 2020 compared to last year because of the coronavirus, the International Air Transport Association has predicted.

Ethiopian Airlines, the state-owned jewel of the national economy and a vital source of foreign currency, says it is facing a revenue loss of $550 million from January to April alone.

"If you put yourself in my shoes, the only way for Ethiopian Airlines is to expand or refocus its resources, energy and time on businesses which are not affected by coronavirus," Tewolde said.

Yet even as the airline moves to assume a central role in Africa's pandemic response -- ferrying badly needed medical equipment across the continent -- it may last no more than three months before seeking outside financial help, Tewolde said.

"Will we be able to sustain with only 15 percent of our revenue?" he said, referring to the amount typically brought in by cargo.

"For a short period of time, yes. But for how long? Very difficult to predict."

In the early days of the pandemic, Ethiopian Airlines was criticised domestically for refusing to follow competitors like Kenya Airways by suspending flights to China, where the coronavirus originated late last year.

But Tewolde said he would make the same call today, pointing out that Ethiopia's first case of COVID-19 -- the disease caused by the coronavirus -- turned out to be a Japanese man who arrived in the country from Burkina Faso.

The airline's China routes now form the backbone of its cargo operations as countries scramble to get their hands on Chinese-produced personal protective equipment and other goods.

This task is made more challenging by the fact that passenger flights, which can carry cargo in their underbelly, are down so sharply.

"Right now, there is a severe short-term shortage of cargo out of China," said Craig Jenks, head of the New York-based Airline/Aircraft Projects Inc. consultancy.

At the start of the crisis, Ethiopian Airlines had 12 cargo freighters, and it has since enlisted "10 to 15" passenger jets to build out its fleet, in some cases ripping out seats, Tewolde said.

That capacity falls short of competitors like Emirates and Qatar Airways, but Jenks said cargo could still potentially give Ethiopian as much as 40 percent of its normal revenue.

Ethiopian has simultaneously embraced work unique to the coronavirus era.

Top officials from Washington to Tokyo have praised the airline for repatriating their nationals -- including US Peace Corps volunteers based in 12 countries across the continent.

As the severity of the crisis became clear, Ethiopian executives "reached out to the diplomatic community to offer further cargo services and highlight their ability to offer chartered/special flights," a State Department official said in a statement to AFP.

All told the airline has "supported the transport of over 2,100 US citizens and legal permanent residents" to the tune of around $4.7 million, the official said.

Ethiopian has also worked with Carnival Cruise Line, which earlier this month hired four charters to repatriate crew members docked in the US state of Louisiana.

The airline expects to be deeply involved in Africa's pandemic response.

On Monday it finished distributing the second batch of masks, testing kits, ventilators and other supplies donated to African countries by Chinese billionaire Jack Ma.

And last week the United Nations opened an aid transport hub in Addis Ababa that will rely on Ethiopian cargo jets to move supplies and aid workers across the continent.

Tewolde said this represented "a continuation of our leadership in Africa" even during periods of conflict or outbreaks of other diseases like Ebola.

"All kinds of problems that Africa has suffered, we have always stood with Africa," he said.

With the financial toll of the crisis mounting, Ethiopian is in talks to defer lease payments on aircraft and it may seek deferrals on some payments of $2 billion in debt, Tewolde said.

The company is determined not to lay off members of its regular workforce, though it could resort to pay cuts depending on how long the crisis lasts, he said.

The current cargo boom could start fading in June, and passenger traffic could stay suppressed well after countries lift travel restrictions, he said.

"We will do whatever it takes to make sure that we survive," he said.