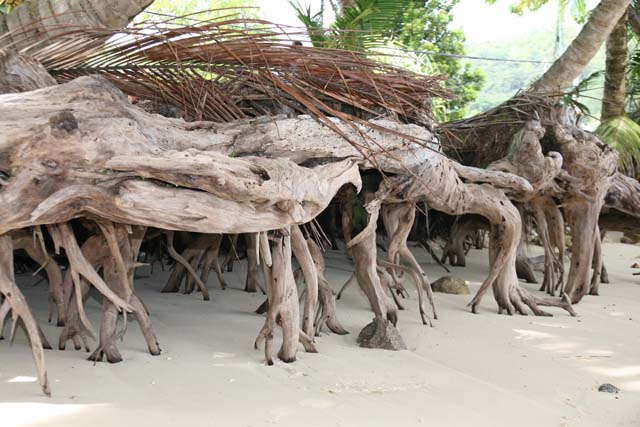 An eroded beach and exposed tree roots at Anse La Mouche (Western region of the Seychelles main island of Mahe) back in 2011. Example of the effects of Climate cahnge (Mervyn Marie, Seychelles News Agency)

But while the scenery is breathtaking, it is likely to be a poignant reminder for those present that the world’s natural beauty could soon disappear forever if global leaders do not act now to halt climate change.

Small island states are facing the consequences of rising sea levels, food and water shortages and severe natural disasters, more so than the rest of the world due to their geographical isolation, lack of development and proximity to sea level.

Among the 52 nations currently classified as small island developing states by the UN, the small Indian Ocean island republic of Seychelles off the eastern coast of Africa, home to a population of about 90,000, is working hard to make its voice heard in the battle against global climate change.

In his address at the opening ceremony of the Third International Conference on Small Island Developing States on Monday, Seychelles’ President James Michel presented four major proposals for the sustainable development of SIDS, including calling for sustainable development models that are adapted to the needs of SIDS and the need for more affordable financing options for debt-stricken island nations.

Signing on for renewable energy

The Seychelles Minister for Environment and Energy, who is part of the archipelago's delegation at the conference Professor Rolph Payet put his pen to the SIDS DOCK treaty on Tuesday along with 30 other island and low-lying nations.

The SIDS DOCK is an initiative among member countries of the Alliance of Small Island States (AOSIS) to help the Small Island Developing States (SIDS) to transform their national energy sectors into a catalyst to ensure their sustainable economic development and them generate financial resources to address adaptation to climate change.

By signing the treaty Payet and his fellow colleagues have reinforced their commitment to mitigating the effects of climate change and working towards the energy security of SIDS by transforming their national energy sectors with environmentally-friendly, cheaper renewable energy.

Seychelles already has two renewable energy projects: a 6 Megawatt wind farm on the main island of Mahé and a GEF-funded pilot project for partly-subsidised rooftop photovoltaic (PV) systems throughout the main inhabited islands.

‘Blue Growth’ the key to development

The other Seychelles Minister in Samoa, the Minister for Foreign Affairs, Jean-Paul Adam called for a unified stance on reclaiming ownership of maritime spaces and the role this plays in maintaining the diversity of SIDS as well as other nations.

Adam was speaking at a side event called the ‘Blue Growth Initiative and SIDS’ – a concept spearheaded by the Seychelles also on Tuesday, according to a press statement from the Ministry of Foreign Affairs.

Adam said that the right frameworks must be created to make maritime spaces viable in order to make the Blue Economy concept more inclusive, particularly for African SIDS.

“SIDS must improve the resilience of the oceans, their fragile ecosystems and maintain their unique aquatic biodiversity as a main enabler in ensuring their continued sustainable use and manage aquatic resources for future generations,” he added.

The third international conference on SIDS in Samoa ends today.