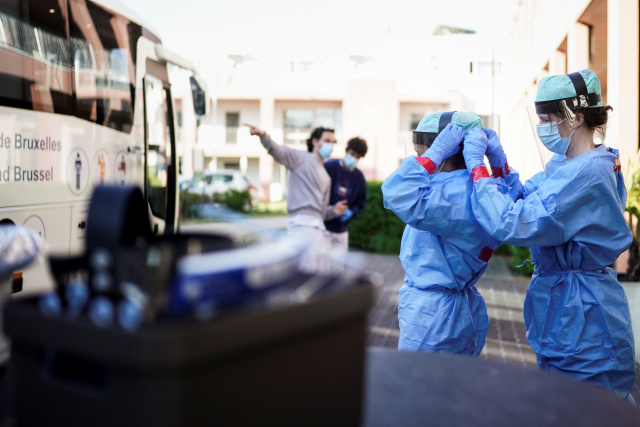 Members of a medical team working in a Saint Pierre Hospital bus parked in front of a retirement home, get ready as they arrive to test for the COVID-19 the staff workers of the elderly residence, in Brussels, on April 22, 2020 during a strict lockdown in the country aimed at curbing the spread of the novel coronavirus.(Kenzo TRIBOUILLARD / AFP)

(AFP) - EU leaders are set to haggle on Thursday over a giant package to help their economies recover from the coronavirus pandemic, but bitter divisions mean little progress is expected.

The situation facing the EU is dire: more than 110,000 confirmed COVID-19 deaths and an economy set to shrink by 7.1 percent because of the lockdown.

But while the 27 members agree that a stimulus running into hundreds of billions of euros will be needed, they are split over the details -- in particular how it should be funded.

The leaders will meet by videolink to discuss the virus crisis for the fourth time in seven weeks -- a sign, one senior Brussels official said, of the "seriousness of the challenge and the importance we attach to a common solution".

But common ground is scarce. The pandemic has reopened the wounds of the 2009 financial crisis, once again pitting northern and southern Europe against one another.

Southern states like Spain and Italy, badly hit by the disease and heavily indebted, are demanding "solidarity" -- financial help -- from the rich north.

He told the Italian parliament he would accept "no compromises" and would not sign up to a "bargain deal".

On the other side, northern countries led by Germany and the Netherlands refuse even to entertain the idea of coronabonds and are reluctant to fund Mediterranean governments they accuse of profligacy.

In a sign of how far apart they are, leaders will not even issue their usual joint statement after the videoconference, a diplomat told AFP.

"No one should have exaggerated expectations for this meeting," another diplomat said.

Spain has proposed creating grants rather than loans to help badly affected countries, funded by "perpetual EU debt" that would be backed by the bloc's long-term budget.

Madrid argues that this approach would avoid saddling already weakened national economies with yet more loans.

But the idea looks likely to be a non-starter. One senior diplomat said their country would "never agree" to the idea.

EU Council President Charles Michel, the nominal host of the summit, set a low bar in the invitation letter sent to leaders on Tuesday.

He urged them only to "work towards" creating a European Recovery Fund to rebuild the bloc's economy after the pandemic eases.

The leaders are expected to ask the European Commission, the bloc's executive, to analyse the probable needs and come back with a proposal.

They will also sign off on a 540-billion-euro ($584-billion) emergency package agreed by EU finance ministers earlier this month.

- No deal before summer -

Various figures have been bandied around for the long-term fund, though no decision is expected on Thursday.

While Mario Centeno, head of the Eurogroup of eurozone finance ministers, has suggested a range of 700 billion to 1.5 trillion euros, French Finance Minister Bruno Le Maire has mooted one trillion.

French officials have played down the prospect of agreeing on the long-term recovery fund before June or July.

"We need a physical meeting of heads of state and government -- at least one -- and for the moment that is not possible," a French presidency source said.

A senior EU official acknowledged no deal was likely before the summer but said Thursday's meeting could see progress on adapting the bloc's new seven-year budget to address the virus fallout.

Building the recovery fund into the budget for 2021-2027 gives some reassurance to northern countries by putting it into an established framework.

But it adds further complication to an already thorny debate about the EU's spending priorities in the coming years.

It also raises the possibility that poor eastern European countries will be asked to give up development money to pay for the coronavirus recovery in wealthier nations like Spain and Italy.