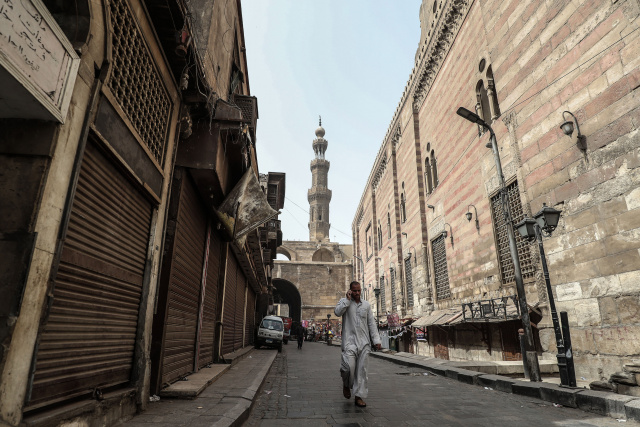 This picture taken on April 24, 2020 on the first Friday of the Muslim holy month of Ramadan shows a view of the area around Bab Zuweila (background), one of the remaining gates in the walls of the old medieval city of Egypt's capital Cairo, almost empty due to the COVID-19 coronavirus pandemic.(Mohamed el-Shahed / AFP)

In a televised press conference with the central bank governor and other ministers, Madbouli did not specify the size of the one-year financial aid package the government was seeking from the IMF alongside technical assistance.

He said the loan would be negotiated "within days".

In a statement Sunday, IMF Managing Director Kristalina Georgieva said Egypt's request would be presented to the Fund's executive board "within the next few weeks".

But she struck a clearly supportive tone, saying Cairo had "responded quickly and decisively" to limit the spread of the virus and support affected people and businesses.

Georgieva added that "the Central Bank of Egypt has also implemented timely measures to support the domestic economy."

Madbouli, while touting the North African economy's strong performance before the outbreak, said the aid package was crucial, given that flights are grounded and tourism halted.

"No one knows when this crisis will end, so we wanted to take some measures that would build on the economy's gains, especially after the complete shutdown of the aviation and tourism sectors," he said.

Egypt's tourism sector earned $12.6 billion in 2019, the highest figure in nearly a decade.

But the impact of coronavirus has been severe. Foreign reserves dropped from $45.5 billion in February to $40.1 billion at the end of March, central bank governor Tarek Amer said.

Planning Minister Hala Saeed said that even though the "unprecedented crisis" prompted by the virus had affected global markets, Egypt was still on track to achieve 4.5 percent growth this year.

The country loosened its lockdown restrictions with the beginning of the holy month of Ramadan, allowing shops and malls to trade on weekends and reducing curfew hours by an hour to 9pm until 6am.

Egypt previously signed a $12 billion aid package with the Washington-based IMF in 2016, with the last tranche paid out last year.

Since the 2011 revolt that toppled former president Hosni Mubarak, the economy of the Arab world's most populous country has sustained multiple shocks caused by political instability and security issues.

The government has imposed harsh austerity measures in recent years to try to reduce its deficit, including cutting subsidies on fuel and electricity.

The impact of economic reforms has been hardest on the poor, in a country where one in three live below the poverty line.

Egypt has the third-largest economy on the African continent, behind Nigeria and South Africa.