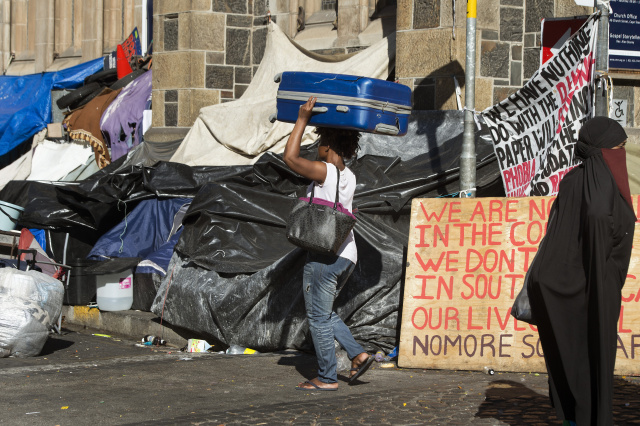 A woman walks with her belongings past a sign as hundreds of people from various African countries are evicted from the makeshift camp they are occupying around the Central Methodist Mission in Cape Town on March 1, 2020. The refugees occupying the surroundings of a church in the city centre asked the UNHCR to intervene on their behalf after they said they felt no longer safe in South Africa due to high level of crime and xenophobia and are seeking help in being repatriated or deported to another country. (RODGER BOSCH / AFP)

(AFP) - Conflict and disaster forced more than 33 million people to flee within their own countries last year, putting them at greater risk amid the global COVID-19 pandemic, monitors said Tuesday.

The new figure brings the total number of people living in internal displacement to a record 50.8 million, according to a report by the Internal Displacement Monitoring Centre (IDMC) and the Norwegian Refugee Council (NRC).

The number of internally displaced people (IDPs) is far higher than the some 26 million who have fled across borders as refugees.

"IDPs are often highly vulnerable people living in crowded camps, emergency shelters and informal settlements with little or no access to healthcare," IDMC director Alexandra Bilak said in a statement.

"The global coronavirus pandemic will make them more vulnerable still," she said, warning it would "compromise their already precarious living conditions by further limiting their access to essential services and humanitarian aid."

The report found that conflict forced 8.5 million IDPs to flee last year in countries like Syria, the Democratic Republic of Congo, Ethiopia and South Sudan.

Together with those already displaced, more than 45 million people live in internal displacement brought on by conflict, including nearly 6.5 million in Syria, which has been ravaged by nine years of civil war.

Another 5.1 million people were living in internal displacement due to natural disasters at the end of 2019, out of nearly 25 million who fled their homes due to such disasters throughout the year

"Year after year, conflict and violence uproot millions of people from their homes," NRC chief Jan Egeland said in the statement.

"Collectively, we are failing by epic proportions to protect the world's most vulnerable," he lamented, calling for concerted action and insisting that "in this age of coronavirus, continued political violence is utterly senseless."

Some 4.5 million were forced to flee their homes by cyclone Fani in India and Bangladesh, cyclones Idai and Kenneth in Mozambique and hurricane Dorian in the Bahamas.

But Bilak noted to AFP that most displacements due to natural disasters were actually "government-led, preemptive evacuations to save lives and protect people" and that most people are able to return home relatively quickly, "as long as their home has not been completely destroyed".

Going forward, Bilak warned that the coronavirus pandemic could make it more difficult for countries to take the steps needed to evacuate before weather hazards hit, since thousands of people should not be crowded together in shelters.

"How you balance those time-sensitive humanitarian relief efforts with your national effort to fight the spread of COVID is going to be a difficult balancing act," she said.

General » Be a reporter: Write and send your article » Subscribe for news alert
Tags: conflict, refugee