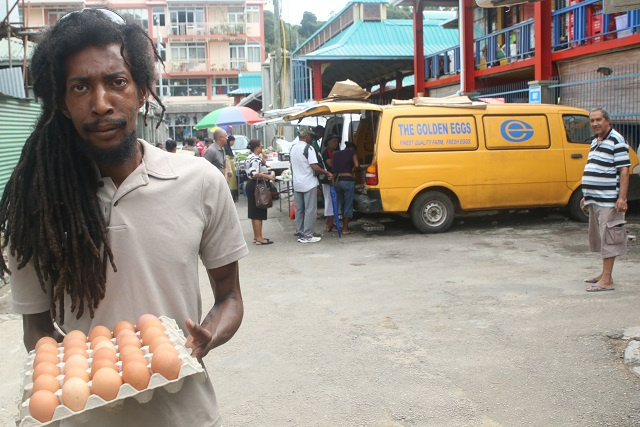 The average cost of an egg in the market previously was about $0.20 (SCR 3), dropping down to as low as SCR1. (Joe Laurence, Seychelles News Agency)

(Seychelles News Agency) - More poultry farm owners in Seychelles are selling eggs direct at markets after a sudden drop in demand because of a lack of tourists due to COVID-19 restrictions, said a top official.

The Principal Secretary for Agriculture, Antoine Moustache, said going directly to the market is a good approach by egg producers as it cuts down on middlemen and reduces the price.

"The more consumers can get it fresh and at an affordable price, I think they would appreciate it better," Moustache.

"Before the whole situation of COVID-19 all egg producers were able to sell their eggs without complaints. This is simply because a lot of them were targeting tourist establishments. For the fact that tourist arrival is now zero, we know the impact that it might have on them."

The average cost of an egg in the market previously was about $0.20 (SCR 3), dropping down to as low as SCR1 depending on the number of sellers in the market at the same time.

Moustache said a meeting was held with large scale producers to look at how they are being affected by the COVID-induced drop in demand and how they can avoid having to kill their laying hens.

"I believe that this is an essential point as they believe that it would be more costly to kill their chickens and then having to restart at the appropriate moment," said Moustache.

According to the Seychelles Agricultural Agency, 23 farmers are active egg producers. Six are producing on a large scale and their production is estimated at over 22 million eggs a year.

A poultry farm owner, Daniel Payet, from western Mahe district of Grand Anse is producing eggs on a large scale and told SNA he will not be able to sustain production.

"Fifty percent of eggs produced in the country was consumed by the hotel industry. I was producing almost 15,000 eggs per day and only 3,000 reached the local market through my two shops," said Payet.

He said that as more owners sell directly on the market "there is a sort of flood of eggs in the market and prices are going down. The rupee keeps depreciating against the dollar and animal food costs are increasing. We would definitely run at a loss."

Payet has proposed the need to regulate prices to the government.

Moustache said, "It would have been good if farmers could regulate the prices in the shops at this moment in time. If it costs a farmer SCR2 to produce an egg, it would not be fair if they sell it at SCR2.50, to merchants for them to later sell it at SCR4."