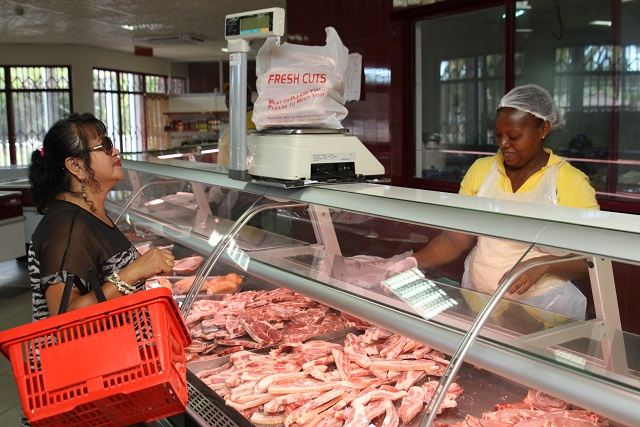 (Seychelles News Agency) - The Seychelles' government will increase the levy on imported pork and poultry to cut down on importation beginning of next month to encourage local farmers to produce more to ensure food security in the country.

The Principal Secretary for Trade, Cillia Mangroo, told SNA the money raised from the import tax will go towards the Livestock Trust Fund put in place by the government to help farmers cope with their cost of production.

"The taxes collected on imported meat before were being used for a lot of things such as irrigation and road building. But now with the new programme we are putting in place to ensure food security, we need the increased levy to be able to sustain it," said Mangroo.

The Minister of Finance, Maurice Loustau-Lalanne, announced the temporary levy when he presented the revised budget 2020 to the National Assembly on April 7, as part of measures to mitigate the adverse effects of COVID-19 on the Seychelles' economy.

"This programme that the committee will establish will create more opportunities for the population to have better access to fresh fish in every part of the country. Furthermore, with fewer importations, it should be easier for local farmers to increase their production to help towards food security," Loustau-Lalanne.

The finance minister said the "measure will come into effect as from 1st May to give the Ministry of Agriculture and Fisheries sufficient time to establish the mechanisms for it to work effectively."

The Cabinet of Ministers approved the new measure last week.

Mangroo told SNA that the decision to increase the levy on pork and poultry only was because they are already being produced in Seychelles, a group of 115 islands in the western Indian Ocean.

The chairman of the Agricultural Producers' Association of Seychelles, Barry Nourrice, told SNA that levy is a good step taken by the government to support and push local agriculture the island nation.

A lot of different sectors are trying "to increase their economic activities. A way that we can do that in agriculture is through a levy imposed on imported meat," he said.