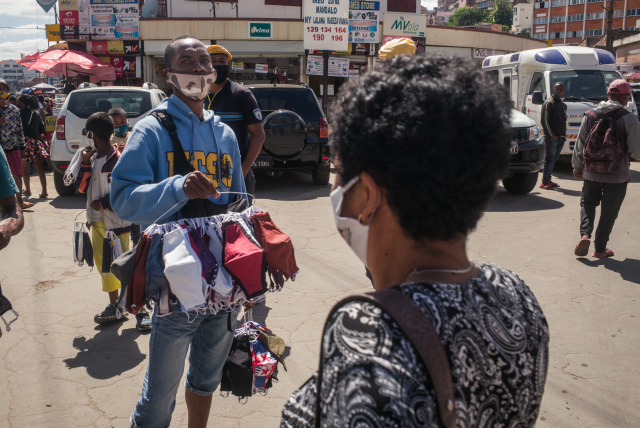 A man sells face masks while police officers search for possible lawbreakers, in downtown Antananarivo on April 27, 2020. Madagascar police on April 27, 2020, sanctioned citizens caught outside without face coverings by forcing them to sweep pavements, law enforcement officials said.
Madagascar President Andry Rajoelina has made it compulsory to wear face masks outdoors in Madagascar's capital Antananarivo, as well as in the cities of Fianarantsoa and Toamasina, the curb the spread of coronavirus.(RIJASOLO / AFP)

President Andry Rajoelina has made it compulsory to wear face coverings outdoors in the capital Antananarivo, as well as in the cities of Fianarantsoa and Toamasina, to curb the spread of coronavirus.

The new rule, which came into force on Monday, was announced on April 20 alongside the gradual lifting of lockdown measures in the three main cities.

"Seventy percent of people on the street respected the rule... because they are scared of having to sweep pavements," the head of anti-coronavirus operations, general Elak Olivier Andriakaja, said on state television.

"Measures were taken before the sanctions fell into place to raise awareness and distribute mouth covers," Andriakaja added.

"I think that's enough and that sanctions must now be applied."

Around 500 people in Antananarivo and Fianarantsoa were penalised on Monday, said police deputy head Christian Rakotobe.

Antananarivo commissioner Hector Razafindrazaka said 25 people were sentenced on the spot and forced to sweep the capital's dusty streets.

Images of the embarrassed-looking offenders were widely circulated on social media.

To date the Indian Ocean island-nation has detected 128 cases of coronavirus. No fatalities have been recorded so far and 75 patients have recovered.