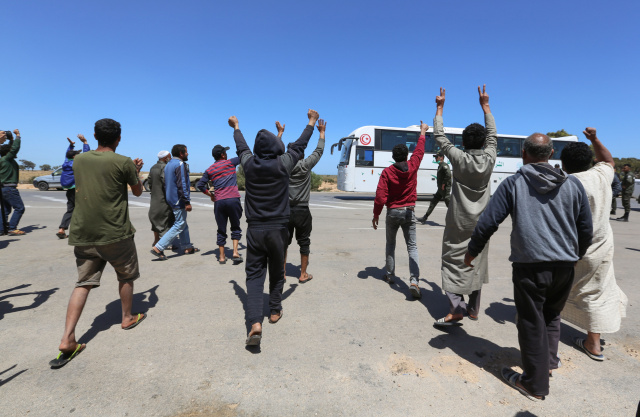 Libyan road transport workers stranded on the Tunisian-Libyan border crossing of Ras Jedir in southeastern Tunisia, gesture in farewell as a bus transporting repatriated Tunisian workers takes off, on April 21, 2020. Hundreds of Tunisians stranded for weeks in war-racked Libya due to the coronavirus have returned home after forcing their way through a border crossing, the UN and aid groups said, while Tunis's interior ministry denied that Tunisians had crossed the Ras Jedir border point a day earlier using force, saying authorities at the frontier allowed 652 to enter from Libya. (FATHI NASRI / AFP)

(AFP) - The EU's delayed naval mission to enforce an arms embargo on Libya will be ready to begin work in the coming days, officials told AFP on Wednesday.

EU states agreed on Monday to equip the new operation with ships, planes and satellites, a spokesman for the bloc's diplomatic chief told AFP.

Operation Irini, as the mission is known, aims to halt the flow of arms into Libya, where the UN-recognised Tripoli government is under attack from the forces of strongman Khalifa Haftar, who controls much of the south and east.

An Italian navy ship will reach the zone of operations -- in the eastern Mediterranean -- in the coming days, a diplomatic source told AFP.

It will be supported initially by ships from other EU nations in the area until the arrival of vessels formally attached to the Irini mission.

Stano told reporters that EU states had promised "three naval assets and three air assets", with three more of each in "associated support".

Irini replaces the controversial Operation Sophia, set up in 2015 to fight people-smuggling across the Mediterranean at the height of Europe's migrant crisis, which formally ended at the end of March.

The new mission was supposed to start immediately, but it was held up for nearly a month by bickering between Italy and Greece over who should hold the command.

Agreement over Irini has been hard fought. The 27 EU states finally reached an accord in principle in February over objections from Austria and Hungary.

They feared the new mission would in effect create a rescue fleet that would ferry migrants across the Mediterranean to Europe.