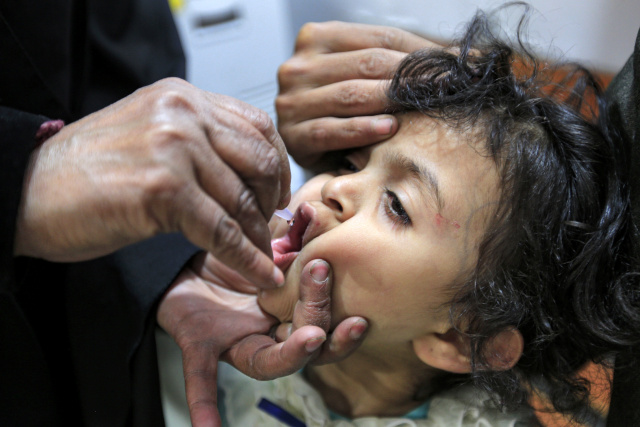 A Yemeni child receives a polio vaccination during an immunisation campaign at a health clinic in the capital Sanaa on December 25, 2019. Health authorities in war-torn Yemen on December 23 had launched a national polio immunisation campaign targeting over 5.5 million children, supported by the World Health Organization (WHO) and the United Nations Children's Fund (UNICEF). (Mohammed HUWAIS / AFP)

(AFP) - Dozens of countries risk running out of vaccines for diseases like measles because of restrictions on flights brought in to tackle the new coronavirus, the United Nations warned on Friday.

The UN children's agency UNICEF called for support to unlock a massive backlog in vaccine shipments.

It said the delays had been caused by "unprecedented logistical constraints" linked to lockdowns and other measures put in place to halt the spread of COVID-19, which has killed more than 233,000 people and infected nearly 3.3 million in a matter of months.

But UNICEF and other organisations have warned that a drop in routine vaccinations could fuel other, potentially deadlier outbreaks of a range of diseases.

UNICEF said in 2019 it had procured 2.43 billion doses of vaccines for 100 countries, to reach around 45 percent of all children worldwide under the age of five.

But since the week of March 22, the agency has seen a 70-80 percent reduction in planned vaccine shipments because of the sharp decline in commercial flights and limited availability of charter flights, spokeswoman Marixie Mercado told journalists in an online briefing.

"Dozens of countries are at risk of stock-out due to delayed vaccine shipments."

She warned that 26 countries, mainly in Africa but also several Asian countries like North Korea and Myanmar, were particularly at risk.

The cost of securing space on the few flights available has soared, with freight rates now up to 200 percent above normal prices, she said.

Five of the countries most at risk were hit with outbreaks of measles -- a highly contagious, sometimes fatal viral infection, she said.

Mercado warned that even before the pandemic, vaccines for measles, polio and other diseases were out of reach for some 20 million children under the age of one every year.

"Disruptions in routine immunisation, particularly in countries with weak health systems, could lead to disastrous outbreaks in 2020 and well beyond," she said.