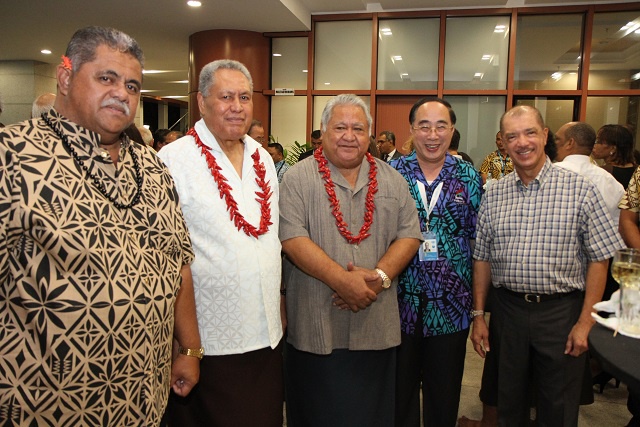 (Seychelles News Agency) - Seychelles President James Michel has thanked the Food and Agricultural Organisation (FAO), for helping to build the resilience and capacity of the Indian Ocean archipelago and other small island states and called on the organisation to further assist Seychelles in developing the Blue Economy.

According to a press statement issued by State House this afternoon, Michel met with the Director General of the FAO, José Graziano Da Silva, in the margins of the third international conference on SIDS, in Samoa.

Michel has put emphasis on the specificities and vulnerabilities of SIDS adding that it is for this reason “Seychelles is supporting the introduction of a Vulnerability Index within in the UN system.”

When he talked to FAO’s Da Silva about the expertise needed for the development of the Blue Economy Michel mentioned particularly the aspect of research in areas such as sustainable development of fisheries and blue growth initiatives.

“Mr Da Silva said that the FAO would gladly support Seychelles in these areas and that the organization is improving its expertise in ocean resources. He added that as the oceans will provide food for the future, this is a priority area for the FAO,” read the State House statement.

The UN Under Secretary General and Executive Secretary of the UN Economic Commission for Africa, Dr Carlos Lopes also expressed his support to the work Seychelles is doing to promote the Blue Economy, in a separate meeting with Michel.

The Seychellois head of state also met with the President of the neighbouring Indian Ocean archipelago of Zanzibar, off the coast of east Africa, Dr Ali Mohamed Shein where they spoke about the need to develop relations between Indian Ocean islands, given their proximity and similarities.

“He added that Zanzibar is a key part of the Western Indian Ocean Coastal Challenge which is being launched in Samoa, and that this project will bring even more opportunities through mobilisation of economic potential of the Blue Economy,” read the statement.

The Western Indian Ocean Coastal Challenge (WIOCC) is expected to be a strong and vocal partnership of Western Indian Ocean islands as well as other coastal countries and stakeholders where they will work together and commit to island conservation and sustainable livelihoods and find ways to respond to climate change threats over the next 20 years.

Another collaboration between regional islands with Michel addressed during talks with the president of Zanzibar is the Vanilla Islands tourism project which is aimed at revitalizing tourism marketing for the islands in the Indian Ocean by working together under a common brand.

According to the State House statement, Shein said that Zanzibar is keen to have exchanges in the tourism sector and pursue the partnership opportunities of the Vanilla Islands concept.

Climate change is another issue which Michel addressed in the meetings held in the margins of the Samoa conference.

This was during talks with the French Secretary of State for Development and La Francophonie in the Ministry of Foreign Affairs and International Development, Annick Girardin.

“The President said that the world community needs to reach an agreement as soon as possible and that the New York Climate Summit, organized by the UN Secretary General later this month, should give further impetus for concrete results, which will then bring solutions to the Paris meeting in 2015,” read the statement.

Girardin for her part noted that Seychelles is an important partner to France adding that the French government “is ready to listen to Seychelles’ needs ahead of the 2015 UN Climate talks in Paris.”

On the issue of the Blue Economy, Girardin agreed with the Seychellois head of state that France and the European Union as a whole also need to develop a strong maritime strategy for a Blue Economy for Europe.

The need to increase cooperation on the Blue Economy was discussed between Michel and his French counterpart Francois Hollande at the Indian Ocean Commission Summit in the Comoros last month.