Hardship for foreign workers in Seychelles after value of rupee drops 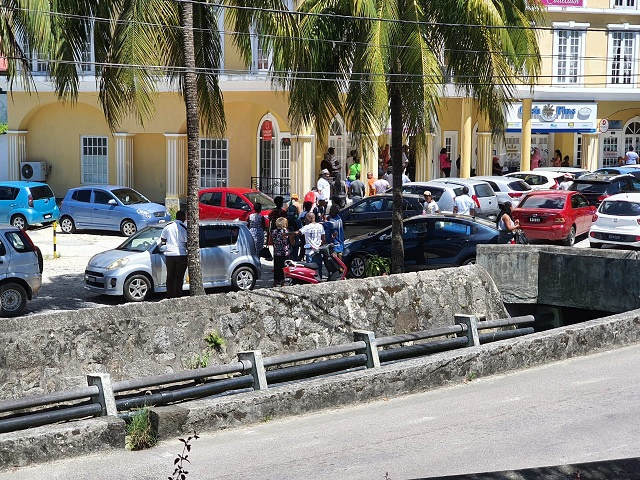 Customers lined up outside Cash Plus in Victoria, the capital. (Daniel Laurence, Seychelles News Agency)

(Seychelles News Agency) - As foreign exchange rates drop in Seychelles, foreign workers sending money back home are getting less value for their money, and at least two exchangers are setting limits on forex transfers to ensure supply for their clients.

Audrey Rose, the managing director of Cash Plus, a local money exchanger, told SNA on Monday that the company has "put a limit of SCR10,000 ($580) that could be transferred per each customer."

Rose said that "this is not an obligatory measure put forth by the Seychelles Central Bank (CBS). This is a decision taken by our money exchanger to ensure a constant supply of foreign exchange for our loyal customers."

Cash Plus is a leading money changer in Seychelles, an archipelago in the western Indian Ocean, with nine branches covering the three main islands of Mahe, Praslin and La Digue.

Rose added that the limitation is also to encourage foreign workers to rethink their budget as they are going to get less on the amount they usually transfer.

The managing director of Doubleclick Exchange, Muditha Gunatilake, said his company is facing a major problem with inflows of foreign exchange.

"As a result of that, we are doing money transfer transactions out of Seychelles, as and when we get sufficient forex to do it," he said.

Like Cash Plus, Doubleclick has also imposed a limit of SCR 10,000 per transfer by an individual.

A Kenyan national, Oldfax Musiyebo, who has been working in Seychelles for two years, said that he got in line Monday at 8 a.m., spending almost two hours to carry out his transfer.

"It has been very difficult to send money during the restrictions. Furthermore, I have been told that there is a limitation on the amount of money you can send per day. This is causing an inconvenience for me as I have to scurry back tomorrow to queue up again," Musiyebo told SNA.

The governor of the Central Bank, Caroline Abel, told a press conference early last month that there is a notable reduction in foreign exchange inflows due to the COVID-19 pandemic – a situation which has given rise to instances where demand for foreign exchange has not been fully met in the past weeks.

She said that up to March 31, the country was earning an average of up to $3 million per day, but currently, less than $1 million is being earned. At the same time, the demand for foreign currency remains high.

The Kenyan national said that because of the depreciation of the rupee he is now getting less than before.

Another foreign worker, Naina Sydio, who is a Malagasy, said that being a foreigner living in Seychelles he has to plan his budget carefully to send money to his family in Madagascar.

Sydio said that the situation "for foreigners keeps getting worse as the rupee depreciates even more day by day while our salary remains the same and it is becoming more and more difficult for us to cope and maintain our family abroad."

The governor of the Central Bank of Seychelles has warned that should the foreign exchange market move too violently "this will bring about severe consequences for the country in terms of prices of goods and services and CBS will have to intervene."

As of April 22, Seychelles has $582 million, out of which $430 million can be spent. Calculations show that this reserve can sustain the country for 17.8 months.

Finance » Be a reporter: Write and send your article » Subscribe for news alert
Tags: Cash plus, COVID-19 pandemic, Central Bank of Seychelles