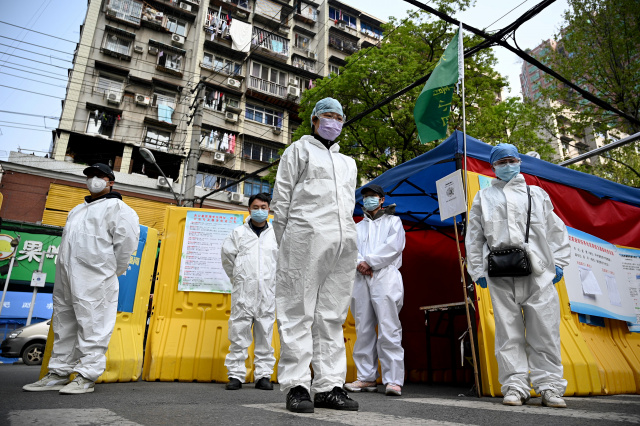 Community volunteers wearing hazmat suits observe three minutes of silence to mourn those who died in the fight against the pandemic along a street in Wuhan, in China’s central Hubei province on April 4, 2020. China came to a standstill to mourn patients and medical staff killed by the coronavirus, with the world's most populous country observing a nationwide three-minute silence. (Noel Celis / AFP)

(AFP) - The World Health Organization said Monday that Washington had provided no evidence to support "speculative" claims by the US president that the new coronavirus originated in a Chinese lab.

"We have not received any data or specific evidence from the United States government relating to the purported origin of the virus -- so from our perspective, this remains speculative," WHO emergencies director Michael Ryan told a virtual briefing.

Top US epidemiologist Anthony Fauci echoed the WHO's statement in an interview published Monday evening by National Geographic.

"If you look at the evolution of the virus in bats and what's out there now, (the scientific evidence) is very, very strongly leaning toward this could not have been artificially or deliberately manipulated," Fauci told the magazine.

"Everything about the stepwise evolution over time strongly indicates that (this virus) evolved in nature and then jumped species," he said.

US President Donald Trump, increasingly critical of China's management of the outbreak, claims to have proof it started in a Wuhan laboratory.

And US Secretary of State Mike Pompeo on Sunday said "enormous evidence" backed up that claim, although the US intelligence community last week said it would continue to study whether the outbreak stemmed from infected animal contact, or a lab accident.

China has vehemently denied suggestions the lab was the source.

"Like any evidence-based organisation, we would be very willing to receive any information that purports to the origin of the virus," Ryan said, stressing that this was "a very important piece of public health information for future control.

"If that data and evidence is available, then it will be for the United States government to decide whether and when it can be shared, but it is difficult for the WHO to operate in an information vacuum in that regard," he added.

- Science at the centre -

The UN health agency -- which has also faced scathing criticism from Trump over accusations it initially downplayed the seriousness of the outbreak to shield China -- has repeatedly said the virus clearly appears to have originated naturally from an animal source.

WHO expert Maria Van Kerkhove stressed during Monday's briefing that there were some 15,000 full genome sequences of the novel coronavirus available, and "from all of the evidence that we have seen... this virus is of natural origin."

While coronaviruses generally originate in bats, both Van Kerkhove and Ryan stressed the importance of discovering how the virus that causes COVID-19 crossed over to humans, and what animal served as an "intermediary host" along the way.

"We need to understand more about that natural origin, and particularly about intermediate hosts," Ryan said.

It was important to know "so that we can put in place the right public health and animal-human interface policies that will prevent this happening again," he stressed.

The WHO said last week it wanted to be invited to take part in Chinese investigations into the animal origins of the pandemic, which in a matter of months has killed more than 250,000 people worldwide.

"We have offered, as we do with every case in every country, assistance with carrying out those investigations," Ryan said Monday.

"We can learn from Chinese scientists," he said.

But he warned that if questions about the virus's origin were "projected as aggressive investigation of wrongdoing, than I believe that's much more difficult to deal with. That is a political issue.

"Science needs to be at the centre," he said.

General » Be a reporter: Write and send your article » Subscribe for news alert
Tags: health, virus, WHO, US