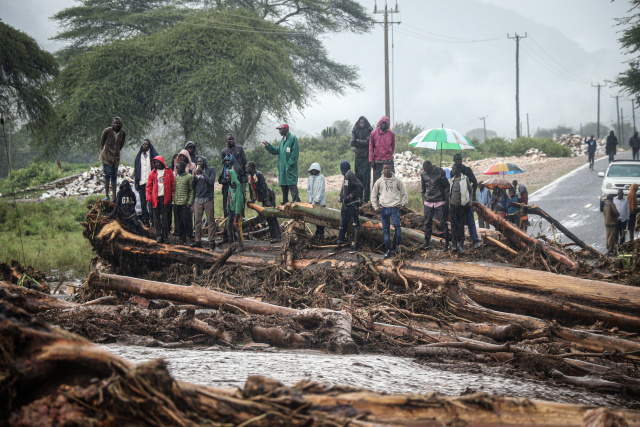 (FILES) In this file photo taken on November 24, 2019 People stand on debris blocking a highway after River Muruny burst its bank following heavy rains in Parua village, about 85 km northeast of Kitale, in West Pokot county, western Kenya. Heavy rains in Kenya have caused floods and landslides that have left 194 dead and destroyed crops since the deluge began last month, complicating the fight against the COVID-19 coronavirus, the government said on May 6, 2020. (STRINGER / AFP)

(AFP) - Heavy rains in Kenya have caused floods and landslides that have left 194 dead and destroyed crops since the deluge began last month, complicating the fight against the coronavirus, the government said Wednesday.

The heavy flooding comes after similarly deadly rainfall at the end of last year, and brings with it a second wave of locusts with massive swarms forming in Kenya and elsewhere in East Africa.

A statement from the presidency said that people were being evacuated from flood-prone areas in several counties, with major dams having reached their maximum capacity.

"So far, 194 people have been killed by floods and related hazards, especially in Western Kenya, Central, and Coastal regions," said the statement.

"Crops running into 8,000 acres (3,240 hectares) have also been swept away" while water supply infrastructure to the capital Nairobi, central Nyeri, western Kisumu and Nakuru, has been destroyed by floodwaters.

The health ministry will meanwhile send masks and essential hygiene supplies to camps of those displaced by the flooding, to prevent the spread of the coronavirus.

Observers fear that the flooding, and a new, more devastating locust invasion on top of the economic blow dealt by the virus could spark a massive hunger crisis in the region.

Africa » Be a reporter: Write and send your article » Subscribe for news alert
Tags: Kenya, flood