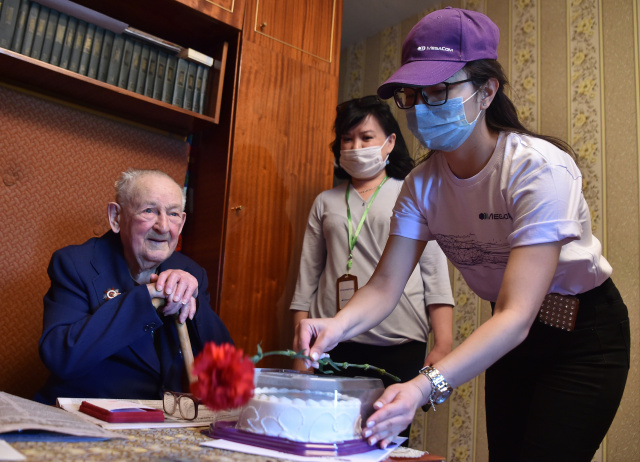 World War Two veteran Ivan Golikov, 100, receives congratulations on the upcoming Victory Day from employees of a mobile operator at his house in Bishkek on May 7, 2020. Kyrgyzstan will celebrate the 75th anniversary of the Allied victory over Nazi Germany in World War II on May 9. (Vyacheslav OSELEDKO / AFP)

(AFP) - Europe marks 75 years since the end of World War II in a sombre mood Friday as the coronavirus pandemic forces the cancellation of elaborate ceremonies even as Berlin declares an exceptional holiday for the first time.

Chancellor Angela Merkel will join President Frank-Walter Steinmeier in laying wreaths at Neue Wache -- Germany's main memorial to the victims of war and dictatorship, followed by a speech by the president.

Unlike elsewhere on the continent, where May 8 is celebrated annually as Victory in Europe Day, the anniversary of Nazi Germany's unconditional surrender to the Allies has always been just another work day in Europe's biggest economy.

The city of Berlin has however declared a one-off public holiday to remember the day 75 years ago when the war that claimed over 50 million lives came to an end in Europe.

The move has prompted some to call for the date to be made a permanent public holiday, touching off a heated debate in Germany.

Firmly slapping down the idea of giving prominence to the anniversary, the leader of the far-right AfD, Alexander Gauland, argued that the date was too "ambivalent".

"It was a day of complete defeat, a day of the loss of huge parts of Germany and the loss of the possibility to shape its future," Gauland told the RND newspaper group.

Gauland, who has described the Nazi period as a mere "speck of bird poo" in Germany's otherwise glorious past, immediately drew fire.

Josef Schuster, president of the Central Council of Jews, said Gauland's view of May 8 was typical of "neo-Nazis".

"The intention is to portray the Germans primarily as victims. I find this distortion of history and relativisation of Nazi crimes irresponsible," Schuster told the daily Neue Osnabruecker Zeitung.

President Steinmeier had originally called a state ceremony to mark May 8 -- the first since 1995 -- but the event before the Reichstag building has had to be scaled down to prevent transmission of the coronavirus.

Likewise, large-scale parades across Europe have been scrapped, drastically downsized or moved online, as the continent grapples with its biggest crisis since World War II -- this time an invisible enemy that has sickened more than 3.7 million worldwide.

With veterans already at an advanced age, organisers of marches had deemed it too risky for them to attend events even in countries which have begun to ease lockdown measures.

Russia had originally planned a huge military display on its May 9 Victory Day, with world leaders including France's President Emmanuel Macron on the guest list.

But now only a flypast will take place over the Red Square, as the country becomes Europe's new hotspot of coronavirus infections.

President Vladimir Putin will lay flowers at the Tomb of the Unknown Soldier memorial, before making a TV address which will not only touch on the war, but is also expected to chart out the country's next steps on battling the virus.

In the Czech Republic, where a lockdown has been completely lifted, politicians will be arriving at 10-minute intervals to lay wreaths on Prague's Vitkov Hill, to minimise contact.

Ceremonies across France have been drastically scaled down, although Macron will still be attending an event on the Champs-Elysees.

In Britain, street parades by veterans have been cancelled.

Queen Elizabeth II will make a televised address to the nation at 9:00 pm (2000 GMT), the same time that her father, king George VI, gave a radio address marking VE day in 1945.

Her son and heir, Prince Charles, will also read an extract from the king's diary from the day, which covers the royal family's appearances on the balcony of Buckingham Palace as massive crowds celebrated in the streets below.

That evening, the young queen -- then known as Princess Elizabeth -- and her sister Margaret were given permission to leave the palace and join the festivities.