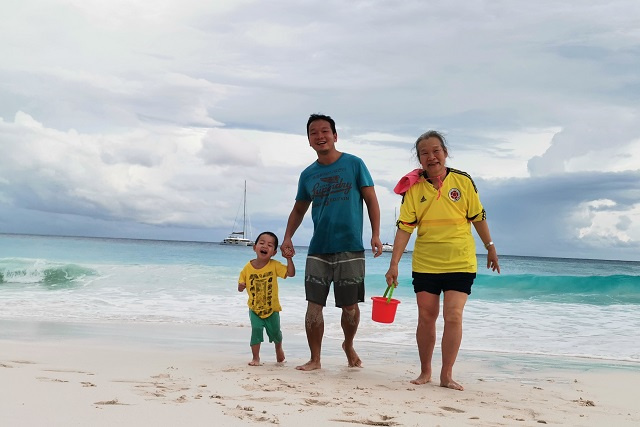 The family found themselves stranded in Seychelles when their return to China coincided with travel restrictions. (Zhouhu Yang)

(Seychelles News Agency) - A Chinese tourist has become a sensation on social media in China after he and his family where left stranded on Seychelles’ third-most populated island – La Digue – due to the COVID-19 pandemic.

Zhouhu Yang’s story started in January when he, his mother, sister and nephew arrived in Seychelles on a two-week family holiday. At the time, the Chinese city of Wuhan – the epicentre of the COVID-19 outbreak – had just been placed under lockdown.

When the family’s departure date – February 10 - grew near, Yang decided to prolong their stay for a little while as his mother was feeling unwell to travel.

“With all the news about the corona, my mother started having headaches and difficulty sleeping, plus she has diabetes. From Seychelles to China, it takes almost 20 hours so we felt it would be too stressful for her health,” Yang told SNA.

Unfortunately for the family, plans to postpone their return to China coincided with travel restrictions and international airlines’ decisions to keep planes grounded. The family found themselves stranded in Seychelles - 115 islands in the western Indian Ocean.

“The daily changes in immigration news have our emotions on a roller-coaster ride. Every time we thought we could fly back, flights were cancelled and we felt very disappointed and upset,” said Yang.

To keep his mood and that of his family’s on the positive side, Yang started recording his day by keeping a daily journal. Hoping to ease the mind of his family and friends back home, the 33-year old would post his experiences and thoughts on social media.

A friend of his - a journalist in China – decided to interview him about his experience and made a short video comprising of footages and photos Yang had posted online. The video was uploaded to Weibo, China’s equivalent of Twitter, on April 25, as well as on the popular short video app Douyin. To his surprise, he received a flood of response from Chinese internet users who were impressed by his optimism.

With several million views on Weibo, Yang documented La Digue, showing viewers the white sandy beaches of the island, the turquoise water not forgetting the Aldabra giant tortoises the family came across.

“It’s a short video, but in the next following days, it just became popular in China. I felt shocked, I wasn’t ready for this,” Yang expressed.

The chief executive of the Seychelles Tourism Board, Sherin Francis, told SNA that her office is grateful that the family shared their experience online, and is in line with the board’s strategy for 2020.

“We want to use our visitors as much as possible as influencers as we believe in their power to influence other visitors and this is a typical case. The video has given us a lot of visibility within the Chinese market,” said Francis.

She added that the video comes at the right time, as STB recently launched a new campaign ‘Dream Now, Experience Seychelles Later’. With tourism as its first economic pillar, Seychelles attracts the largest portion of its visitors from Europe. The country, however, eyes China as a market with great potential.

The family has received assistance from the Seychelles’ immigration department, which extended their visas. The Chinese embassy in Seychelles assisted by providing the family of four with some basic medical supplies and masks for their protection.

“We are thankful for the help we got from the immigration office and the Chinese embassy, which calls us two or three times a week to see how we are and give us information about flights, local pandemic measures and rules. They even send us Chinese food which we pick the stuff up at the pier at La Digue,” said Yang.

While looking forward to going home, Yang admits the experience of being trapped on a remote island is a blessing in disguise.

“Last year, I was travelling a lot and wasn't spending much time with my family. This situation gave me more time to spend with my family. We now understand each other better and have much deeper conversations together,” said Yang.

This is the second visit that Yang and his mother has made to Seychelles – their first trip was in 2017. Describing Seychelles as “a paradise island”, Yang told SNA this is the reason why he decided to bring his family to the island nation again.

“After staying here for more than three months this time around, I think I know more about the local people and culture. The locals have helped us a lot and they are always warm-hearted. Our host, for example, gave us a lot of free chicken, eggs and vegetables and reduced the rental cost of the apartment,” said Yang. Yang and his family are staying at the Villa Coco.

Yang said that when the pandemic is over, he will come back to Seychelles, this time bringing friends along.

Tourism » Be a reporter: Write and send your article » Subscribe for news alert
Tags: pandemic, Weibo, COVID-19, Seychelles Tourism Board