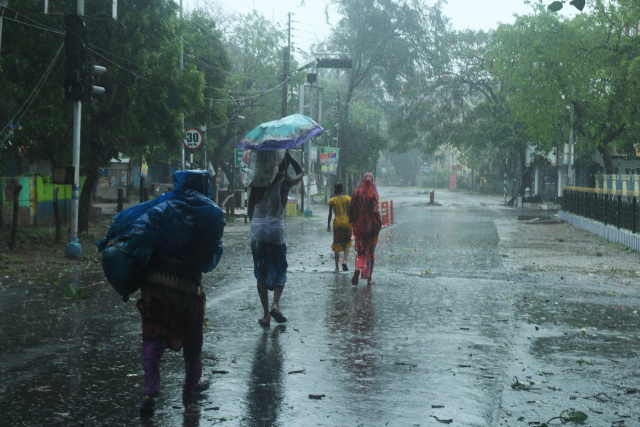 Residents walk along a street to a shelter ahead of the expected landfall of cyclone Amphan in Digha, West Bengal, on May 20, 2020. India and Bangladesh began evacuating more than two million people on May 18 as a cyclone barrelled towards their coasts, with officials racing to ready extra shelters amid fears of coronavirus contagion in cramped refuges. (Dibyangshu SARKAR / AFP)

(AFP) - The most powerful cyclone to hit Bangladesh and eastern India in more than 20 years tore down homes, carried cars down flooded streets and claimed the lives of more than a dozen people.

In Bangladesh officials said they were waiting for reports from the Sundarbans, a UNESCO world heritage site famed for its mangrove forest and population of endangered Bengal tigers, which bore the brunt of the storm.

Widespread relief that the evacuation of more than three million people from coastal villages had averted the horrific death tolls of past storms was tempered by fears of the coronavirus pandemic spreading in crowded shelters.

Authorities in both countries sent masks and sanitiser but social distancing was virtually impossible as families packed into reinforced schools, government buildings and community halls.

Cyclones are an annual hazard along the Bay of Bengal coast. In 2007 Cyclone Sidr left more than 3,500 dead in Bangladesh.

Banerjee estimated there were 10-12 deaths in her state, though not all were immediately confirmed. Bangladesh officials said eight people had died,including a five-year-old boy and a 75-year-old man, both hit by falling trees, and a cyclone emergency volunteer who drowned.

Falling trees and chunks of concrete carried by the powerful winds were also blamed for the deaths in India.

Much of the city of 15 million people was plunged into darkness as transformer stations exploded.

Millions across India and Bangladesh were left without power, officials said.

The cyclone weakened as it moved along the Bangladesh coast but still unleashed heavy rains and fierce winds in Cox's Bazar, the district which houses about one million Rohingya refugees from violence in Myanmar.

Amphan was the first "super cyclone" to form over the Bay of Bengal since 1999, and packed winds gusting up to 185 kph at sea.

It brought a storm surge -- a wall of ocean water that is often one of the main killers in major weather systems -- that roared inland.

Bangladesh officials said the mangrove forests of the Sundarbans had borne the brunt.

"We still haven't got the actual picture of the damage. We are particularly concerned over some wild animals. They can be washed away during storm surge in high tide," forest chief Moyeen Uddin Khan told AFP.

Houses "look like they have been run over by a bulldozer", said Babul Mondal, 35, a villager on the edge of the Indian side of the Sundarbans.

While the frequency and intensity of storms have increased -- blamed partly on climate change -- casualties have fallen thanks to faster evacuations, better technology and more shelters.

Enamur Rahman, Bangladesh's junior minister for disaster management, told AFP 2.4 million people and over half a million livestock were brought to shelters.

India evacuated more than 650,000 in West Bengal and Odisha.

Infection numbers are still soaring in both countries.

Sulata Munda, a villager in Bangladesh, said she and fellow villagers decided not to go to a shelter.

"We fear the cyclone, but we also fear the coronavirus," the mother of four told AFP.