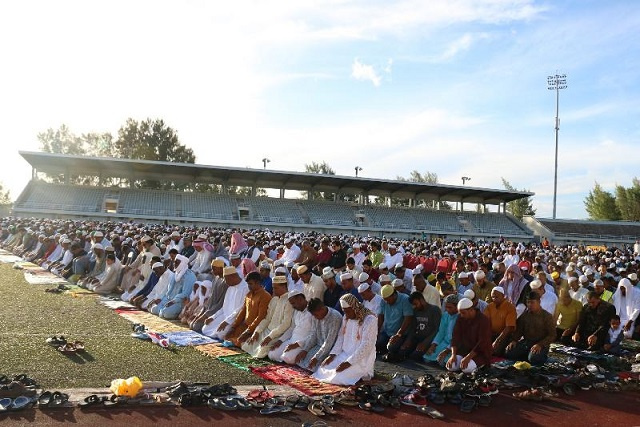 This is the first time in seven years that the Islamic groups Seychelles will not be able to come together at Stad Popiler to celebrate the event. (Patrick Joubert)

(Seychelles News Agency) - Muslims in Seychelles will this year celebrate Eid-ul-Fitr at home with their family after instead of the traditional congregational prayer which marks the end of the fasting month of Ramadan.

The announcement was made on Friday by the National Muslim Council of Seychelles in line with the Public Health's restriction on large assemblies to prevent the spread of COVID-19.

Eid appears likely to begin in Seychelles on Sunday.

In a television sermon on national television, the chairperson of the council, Imam Idris Yusuf, said that the issue had been discussed extensively and it was concluded that the conditions set by the Public Health Authority could not be met for now.

He explained that it was important to follow the guidelines and recommendations of the public authorities as the health and safety of everyone is of great importance.

This is the first time in seven years that the Islamic groups in the archipelago of 95,000 people will not be able to come together at Stad Popiler in the capital, Victoria, to celebrate the event. Eid-ul-Fitr is the first day of the Islamic month of Shawwal and though it is not a public holiday in Seychelles, the law stipulates that it is at the discretion of the employers to allow Muslim workers a day off.

Following this announcement, SNA spoke to a Muslim, Michela Nourrice, and she expressed that despite personal disappointment, she understands the decision taken.

"I feel a bit sad, as that is the day when we celebrate all together after the one-month long of fasting. Frankly, I'm a little disappointed in the sense that due to the COVID-19 pandemic, I cannot practice what I have been taught to do. However, I understand that a lot of emphases is placed on the life of people, that the health of the people is important," said Nourrice.

She added that being a family person, the decision to say the Eid prayers at home is welcomed, though she "will miss the big gathering where everyone comes together."

A press release from the council stated that while Sunday May 24 is the most likely day for Eid, "it is still subject to confirmation by the National Hilal Committee which will issue its decision on Friday evening after the moon sighting teams have submitted their findings."

After the sermon on Friday, Imam Idris also announced that for the moment, all the mosques will remain closed.

"Discussions are being held with the health authorities and logistics are being put in place for a gradual opening of the mosques. Muslims will be advised as soon as these have been finalised," he said.