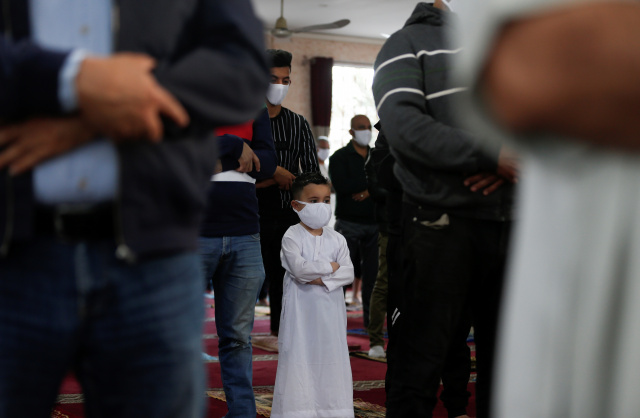 Palestinians perform an Eid al-Fitr prayer despite concerns over the COVID-19 coronavirus outbreak at a mosque in Gaza City early on May 24, 2020, after the local authorities allowed mosques to reopen amid the easing of some social distancing restrictions. (MAHMUD HAMS / AFP)

(AFP) - Muslims and Christians around the world gathered Sunday to celebrate their faith as Eid al-Fitr begins and churches reopen from lockdowns, presenting fresh challenges for authorities trying to curb the coronavirus.

The faithful were preparing for worship from Asia to Europe, where the exit from virus restrictions accelerated with Spain announcing a resumption of foreign tourism and its top football league.

But the disease continued its surge in large parts of South America, with the death toll in Brazil passing 22,000 and infections topping 347,000, the world's second-highest caseload.

Efforts to lift lockdowns continued on both sides of the Atlantic, with US President Donald Trump sending a signal of his intentions with a golfing trip -- his first such outing since March 8.

With infection numbers stabilising in the West, many governments are trying to move towards lighter social distancing measures that they hope will revive moribund business and tourism sectors.

In Spain, which has enforced one of the world's strictest lockdowns since mid-March, Prime Minister Pedro Sanchez sought to reassure potential visitors, saying that from July 1, "entry for foreign tourists into Spain will resume in secure conditions".

The country's La Liga football could return on June 8, he added.

Italy is also due to reopen its borders to foreign tourists from June 3.

French churches were preparing to hold their first Sunday masses in more than two months after the government bowed to a ruling that they should be reopened -- provided proper precautions were taken.

Nearly two weeks into the relaxation of its shutdown, France finally allowed mosques, synagogues and churches to reopen, but priests, pastors, rabbis and imams will still have to ensure the correct safety measures are in force.

Worshippers will have to wear masks, disinfectant gel must be on hand and seating will need to be organised to ensure people keep a safe distance from each other.

"My cell phone is crackling with messages!" Father Pierre Amar, a priest in Versailles, told AFP.

France's mosques nevertheless called on Muslims to stay at home to mark the Eid al-Fitr holiday marking the end of the Muslim fasting month of Ramadan. They said they would gradually resume services from June 3.

In Saudi Arabia, Eid prayers will be held at the two holy mosques in the cities of Mecca and Medina "without worshippers", authorities said on Saturday as the kingdom began a five-day curfew after infections quadrupled since the start of Ramadan.

While for Christians in Jerusalem the Church of the Holy Sepulchre will reopen on Sunday but with tight restrictions.

The virus is still a cause for concern in the region, with tightly packed Gaza registering its first death on Saturday.

Some Muslims in Indonesia were taking radical steps to reunite with loved ones for Eid, with people in the world's most populous Muslim majority country scrambling to get around lockdown rules.

The government has banned most travel across the country, and many residents are turning to smugglers and false certificates.

One man told AFP he got a fake certificate for his daughter to travel home from university in the capital, Jakarta.

"We want to celebrate Eid al-Fitr together like in past years," he said.

Globally about 5.29 million people have now been infected with the virus which has killed 341,000, with Latin America the new global epicentre of the pandemic.

Far-right Brazilian President Jair Bolsonaro has played down the severity of the outbreak but faces increasing pressure amid a rising death toll and the resignations of two of his health ministers within weeks.

Scrutiny intensified after release of a video of a cabinet meeting on April 22 -- as the country was fast becoming a virus flashpoint -- in which Bolsonaro and his deputies barely mentioned the pandemic.

One of the few mentions of COVID-19 came when the environment minister suggested the government take advantage of the distraction created by the virus to relax environmental protection rules.

Neighbouring Peru is also struggling. The country of 32 million has registered more than 3,100 deaths.

With the economic toll from lockdowns rising across the globe, efforts continue to kickstart shattered economies.

In the United States, where the death toll is nearing 100,000, Trump has aggressively pushed to reopen the economy, defying the advice of health experts.

The US economy has shed almost 40 million jobs this year and many companies, most recently car rental giant Hertz, have gone to the wall. But most states have begun easing their lockdowns and many on Saturday reopened public beaches.

"We just get tired of being stuck in the house. There's not much else to do. So I came to the beach," stay-at-home mother Kayla Lambert said, as her two children played in the surf in Galveston, Texas.

Resistance to lockdowns among the restless public has been gathering steam, with protests in Spain and Germany over the weekend.

Thousands gathered in Madrid on Saturday to demand an end to the rules and Sanchez's resignation, in a protest led by the far-right party Vox.

And in Britain a scandal erupted over a disclosure that a top government adviser had even flouted the rules.

Dominic Cummings was seen visiting his parents 250 miles (400 kilometres) away from his London home during the country's lockdown, despite suffering from virus symptoms.

He denies any wrongdoing but faces calls to quit.

Others sounded a rare positive note about the effects of the virus, enjoying open spaces that were once packed with tourists.

"It's wonderful, it's like going back 20 years," she said as her children played.