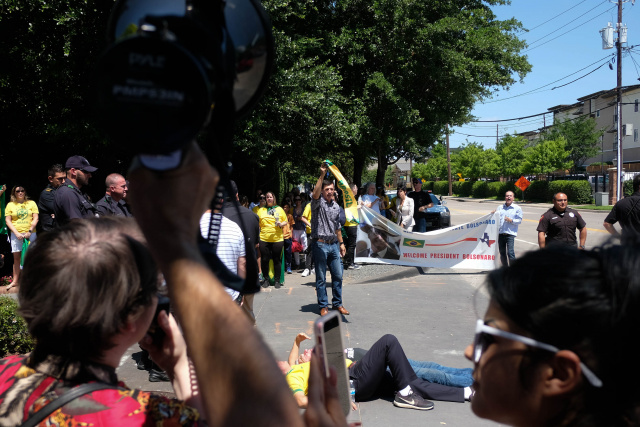 Protesters and supporters of the Brazilian president gather outside the Old Parkland complex in downtown Dallas, Texas, on May 16, 2019, where he was scheduled to receive a "person of the year" award from the Brazilian-American Chamber of Commerce. Anti-Bolsanaro protesters faced his supporters across the driveway of the complex. The two groups clashed at first, shouting across the driveway that police used to separate them, but eventually members from the opposing sides crossed over and hugged. (Kelly West / AFP)

(AFP) - President Jair Bolsonaro hit the streets Sunday for a rally with his supporters, ditching his face mask and breaking social distancing measures even as coronavirus cases surged in Brazil.

The far-right president arrived at the rally outside the presidential palace in Brasilia in a white surgical mask, but soon took it off to greet the cheering crowd, shake hands and embrace supporters, at one point even hoisting a young boy onto his shoulders.

The rally came as Brazil emerged as a new flashpoint in the pandemic.

With nearly 350,000 confirmed cases, Brazil now has the second-biggest caseload in the world, after the United States. It has registered more than 22,000 deaths.

Bolsonaro has famously compared the virus to a "little flu" and argues that stay-at-home measures are unnecessarily hurting the economy.

He grinned as flag-waving supporters shouted "Legend!" and "The people support you, Bolsonaro!"

But although Bolsonaro has a solid core of support -- about 30 percent of voters, according to recent polls -- he faces mounting criticism for his handling of the coronavirus crisis, as well as a potentially explosive probe into whether he obstructed justice to protect his family from police investigations.

The probe took a shocking twist Friday when the Supreme Court judge who ordered it, Celso de Mello, released a video of an April 22 cabinet meeting that investigators have been analyzing for evidence.

In the expletive-laced video, Bolsonaro and his ministers sling insults at state governors, talk of jailing Supreme Court judges and barely mention the coronavirus pandemic at a moment when it was snowballing in Brazil.

He has courted controversy during the pandemic by attending rallies, going out for street food, hosting barbecues and going to the shooting range.