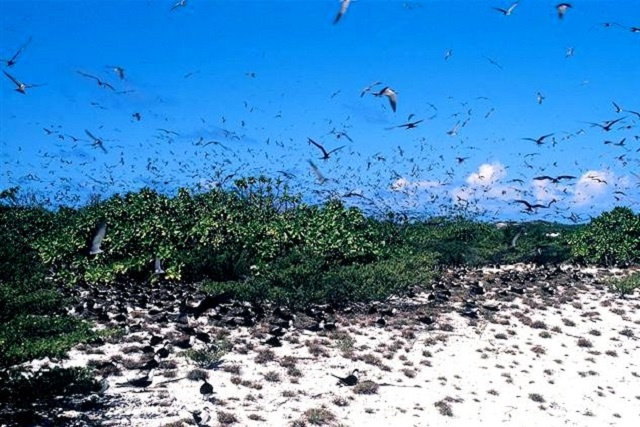 Cosmoledo is the new island where the eggs will be harvested instead of Desnoeufs, where the activity has been traditionally undertaken. (Islands Development Company)

(Seychelles News Agency) - A new island in Seychelles’ archipelago has been designated for the collection of the sooty tern eggs – a seasonal delicacy – for the islanders. Cosmoledo is the new island where the eggs will be harvested instead of Desnoeufs, where the activity has been traditionally undertaken.

The Ministry of Environment, Energy and Climate Change (MEECC) -- in an attempt to regularise all the activities related to sea bird conservation and the collection of sea birds' eggs nationally -- has reviewed the existing regulations to include Cosmoledo and Bird Island on the schedule.

“The main justification for stopping harvesting of eggs on Desnouefs Island is due to the safety of personnel and other individuals involved in the operations especially during the egg collection operations due to the dangerous sea conditions at the island,” a communique from the ministry said..

The statement added that: “Desnoeufs does not have a jetty, landing on the island has always been a dangerous undertaking, and IDC has indicated they can no longer continue to put people’s lives at risk during the operations. Also, Cosmoledo has better facilities for those that will be involved in the operations.”

For years the harvesting of the sooty tern eggs, available from June until August, was done on Desnoeufs, which is one of the outer islands which makes up the 115 islands archipelago of Seychelles. Managed by the Islands Development Company (IDC), the eggs collection is done every two years.

Antonio Constance, better known as Mazaren, who had for many years responsible for birds' eggs collection on Desnoeufs, had recounted to SNA in a previous interview how dangerous the sea there is.

"The harvesting of the eggs was easy but getting the cartons on the ship was a real challenge as the sea was rough with big waves. Mastering the small fibreglass with its cargoes of eggs to the bigger vessel required a lot of skill," said Mazaren.

Cosmoledo Atoll lies just over 1,000 kilometres off Victoria, the capital of the main island of Mahe.  It the past it was used mostly for fishing activities. More than fifteen graves are found on the islands, amongst which are people who died during accidents at sea.

With eggs now being collected on Cosmoledo, does that mean there will no more collection on Desnouefs?

“Yes, starting 2020 there will be no collection of eggs from Desnoeufs. However, the government has recommended that Desnoeufs is kept in the schedule of the Birds Eggs (Collection) Regulations as a back-up site,” the ministry confirmed in its statement.

Apart from Desnoeufs, Bird Island which is privately owned was also harvesting sooty tern eggs, but it is only now that the island is added to the regulation. But does that mean the collection done there was illegal?

“They had administrative permission through an informal agreement with the Ministry of Environment. Our new team in the Ministry has been working hard to regularize many of the outdated legislation and this one has been a priority for this year,” the ministry said. As it has been the case the ministry will supervise the birds’ egg collection and provide oversight of the operations on both islands.

Mazaren said the decision to collect bird eggs on Cosmoledo is a good and long-awaited one. "They should have done this a long time ago as the island has many many more birds than on Desnoeuf. So yes, it is a good decision because every year when the season opens it seems the demand always surpasses the supply."