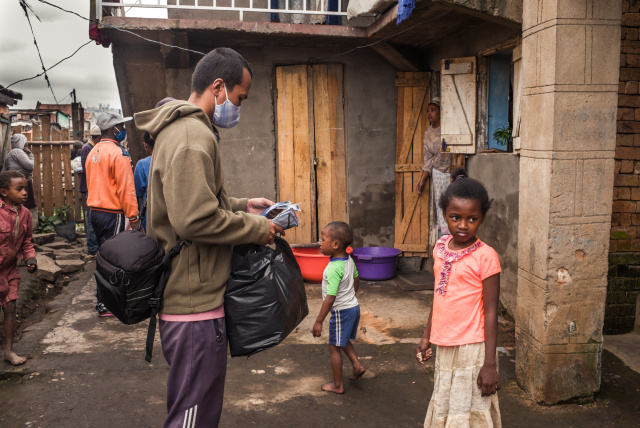 Safidy Andrianantenaina, one of the co-founders and co-managers of the association Le Caméléon walks in the district of Anjezika to distribute food parcels and face masks to its residents, in Antananarivo on May 13, 2020. Le Caméléon, an independent humanitarian association founded in 2017, offers tutoring to a hundred children in dire straits in Anjezika, one of Antananarivo's poorest and most unhealthy neighbourhoods. Following the lockdown of the capital imposed by the authorities on March 23, 2020, many families in Antananarivo lost their jobs and found themselves in an even more dramatic social situation. Since April 21, 2020 the 15 volunteers of Le Caméléon have decided to help the poorest families of the Anjezika district by distributing food parcels or clothes in collaboration with other NGOs or Malagasy solidarity movements such as Solidarité Madagascar. (RIJASOLO / AFP)

(AFP) - Madagascar's government has announced it will dispatch troops and doctors to an eastern town after several bodies were found in the streets and where two people died from the novel coronavirus.

Madagascar's cabinet held a special meeting on Sunday to discuss the situation in Toamasina, the country's second largest city.

The Indian Ocean island nation has registered 527 infections and two deaths, both in Toamasina.

Since Thursday, more than 120 new cases were confirmed, and several bodies were found in the city's streets though the cause of death was not clear.

"Doctors must carry out thorough examinations to see if these deaths are caused by another illness (...) or if they are really due to severe acute respiratory problems which is the critical form of COVID-19," Professor Hanta Marie Danielle Vololontiana, spokesperson for the government's virus taskforce, said in a national broadcast on Sunday.

The government will send 150 soldiers to reinforce Toamasina, maintain order and enforce measures against the coronavirus such as mask wearing and social distancing.

The cabinet also fired Toamasina's prefect without providing any explanation.

A team was also ordered to distribute a drink based on artemisia, a plant recognised as a treatment against malaria, which the Malagasy authorities claim cures COVID-19.

The potential benefits of this herbal tea, called Covid-Organics, have not been validated by any scientific study.

The cabinet has also announced an investigation into the death of a doctor in Toamasina. According to local press, the victim was hospitalised after contracting COVID-19 and was found dead hanged in his room on Sunday morning.