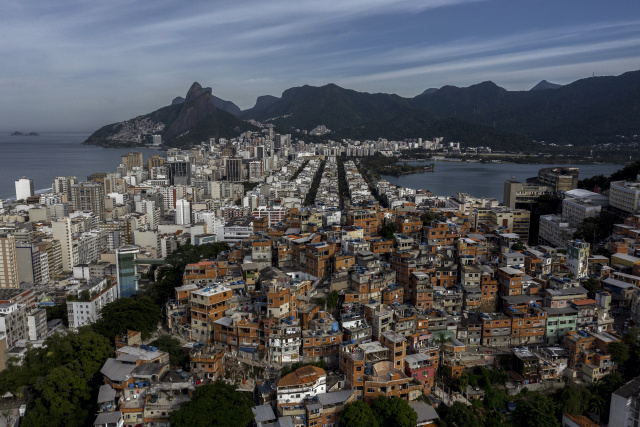 Aerial view showing the Pavao-Pavaozinho favela surrounded by the neighbourhoods of Copacabana, Ipanema and Lagoa in Rio de Janeiro state, Brazil, on May 22, 2020, during the coronavirus (COVID-19) pandemic. Overcrowded neighbourhoods and a big population within poverty levels are a big challenge Latin American countries are facing during this global pandemic. Brazil, the hardest-hit country in the region, has surpassed 20,000 deaths, according to figures released by Brazil's Ministry of Health. (MAURO PIMENTEL / AFP)

(AFP) - Brazil reported the highest daily COVID-19 death toll in the world Tuesday with 1,039 people killed, the fifth straight day the country has topped the list.

Latin America's largest country, which has emerged as a new epicenter in the coronavirus pandemic, has seen its daily death toll surge past that of the United States, the hardest-hit country so far.

The US recorded a death toll of 657 in the past 24 hours, said the Johns Hopkins University tracker. That was the third day in a row it had come in under 700, bringing the country's overall toll to 98,875 deaths.

Meanwhile, Brazil's daily death toll has passed 1,000 four times since the pandemic accelerated in the country a week ago.

Brazil has now confirmed a total of 24,512 deaths, according to health ministry figures.

With a population of 210 million people, Brazil has recorded 391,222 infections, second only to the US, which has confirmed more than 1.68 million.

Brazil is torn over how to respond to the pandemic.

Far-right President Jair Bolsonaro has downplayed the virus and railed against stay-at-home measures, arguing the economic fallout risks causing more damage than the virus itself.

But most state governments have stuck to the World Health Organization's guidance and closed non-essential businesses.

Bolsonaro has meanwhile pinned his hopes on the medication hydroxychloroquine, which -- like US President Donald Trump -- he has touted as a potential wonder drug against COVID-19.

Brazil's health ministry recommends doctors in the public health system prescribe hydroxychloroquine or a related drug, chloroquine, from the onset of COVID-19 symptoms.

It said Monday it stood by that guideline, despite the WHO ending clinical trials of hydroxychloroquine over concerns about its safety and effectiveness against the coronavirus.