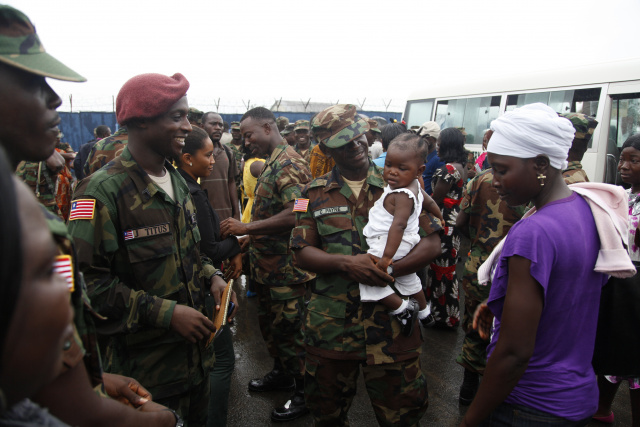 Liberian soldiers say goodbye to their families at the Roberts International Airport in Monrovia, before embarking on a peackeeping mission to Mali to join the African-led International Support Mission to Mali (AFISMA) on June 20, 2013. (AFP PHOTO/ STRINGER)

(AFP) - The number of international peacekeeping missions rose slightly in 2019, but the number of personnel deployed continued to decline, researchers said Wednesday.

The number of multilateral peace operations, both by the UN and others, rose by just one to 61, according to a report by the Stockholm International Peace Research Institute (SIPRI).

But the number of troops, police and civilian staff decreased by 4.8 percent, with all 10 of the world's largest operations either withdrawing staff or keeping the level stable.

The lower number of personnel continues a four-year trend and is a reflection of reductions or closures of several of the UN's larger peacekeeping operations.

"The UN still has the same number of operations, but the newer operations are smaller in size and they're mostly political missions," Jair van der Lijn, director of SIPRI's Peace Operations and Conflict Management Programme, told AFP.

In sub-Saharan Africa, personnel decreased by 5.8 percent, though the region still accounts for 71 percent of all staff in peace operations.

Some of the bigger operations, such as UNAMID in Darfur and MONUSCO in the Democratic Republic of Congo are moving towards the end of their lifetime.

Adding to that, there is "less willingness to deploy new large operations" in the UN's Security Council, he said, pointing to conflict areas such as Syria, Yemen and Libya where potential UN peacekeeping operations could have been up for debate previously.

The reduced willingness can be traced to Security Council members, particularly the US, wanting to cut back on costs, along with a sense that peacekeeping operations are not that effective.

A false assumption according to van der Lijn, who says that from a quantitative perspective the results of peacekeeping operations are actually often positive, though people often focus on failed examples like those in Rwanda or the former Yugoslavia.

With the reduction of personnel in sub-Saharan Africa, the focus of peacekeeping operations is slightly shifting to the Middle East and Northern Africa (MENA), the only regions to see a small increase in the number of peacekeeping personnel.

Among UN peacekeeping operations, MINUSMA in Mali continues to be relatively lethal while most other UN operations suffer relatively few deaths from hostile attacks.

A total of 28 deaths among UN peacekeeping staff were attributed to malicious acts in 2019, one more than the year before.

Of those acts, 23 targeted uniformed personnel, all but one of whom were deployed with MINUSMA.

Under US pressure, UN agrees on deep cuts to peacekeeping