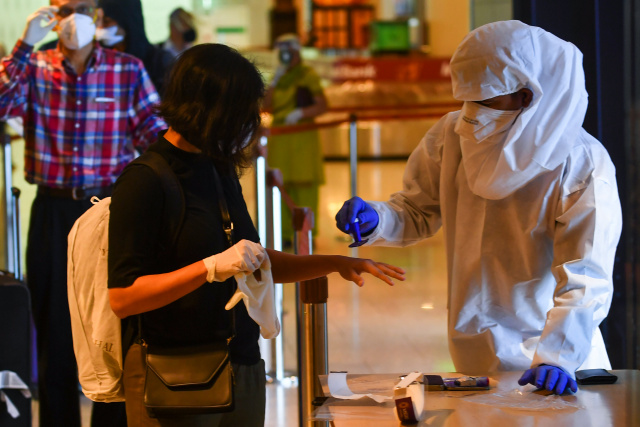 A health worker wearing Personal Protective Equipment (PPE) places a home quarantine stamp of the hand of an arriving passenger at the Chhatrapati Shivaji Maharaj International Airport (CSMIA) after domestic flights resumed, in Mumbai on May 28, 2020. Domestic air travel resumed in India on May 25 after a two-month shutdown over the coronavirus pandemic, a top minister said May 27, in a further easing of the lockdown. The government halted all domestic traffic on March 25 days after suspending international flights as it imposed a strict nationwide shut down to halt the spread of the coronavirus. (INDRANIL MUKHERJEE / AFP)

(AFP) - World leaders on Thursday called for resilience and cooperation after the pandemic recedes, during a UN videoconference in which the United States, China and Russia did not participate.

About 50 leaders took part in the event on development financing, with Italian Prime Minister Giuseppe Conte saying in a recorded message that the goal must be to "leave no one behind."

Canada and Jamaica organized the conference.

Sustainable development goals for 2030 "are more crucial than ever," said European Commission chief Ursula von der Leyen. "We have to work and fight together."

Several leaders, such as German Chancellor Angela Merkel and French President Emmanuel Macron, said the crisis could be an opportunity to grow a "more resilient" economy to aid the fight against global warming.

Deploring a "deep questioning of multilateralism," Macron stressed "cooperation is essential" as well as "support for the most fragile countries," especially in Africa.

UN Secretary General Antonio Guterres asked leaders to "go further" than they already have on debt relief for vulnerable countries, in a spirit of "needs-based solidarity and transparency."

Guterres applauded the meeting, playing down the absence of the three missing world powers.

He told reporters that the United States, China and Russia would participate in six working groups created at Thursday's session, for which meetings are scheduled for July, September and December.

British Prime Minister Boris Johnson said he hoped the world would "build back better," adding "we must work together across borders" to avoid a new pandemic and to help global recovery.

Costa Rican President Carlos Alvarado Quesada said the world after COVID-19 should be dominated by "solidarity, not profit."