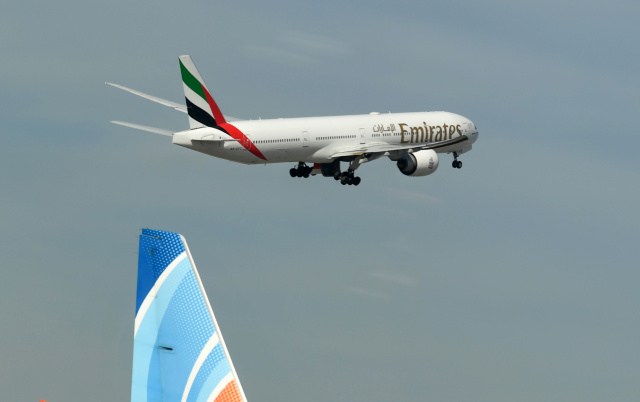 An Emirates aircraft takes off from Dubai International Airport on April 6, 2020, as Emirates Airline resumed a limited number of outbound passenger flights after its COVID-19 coronavirus-enforced stoppage. (KARIM SAHIB / AFP)

(AFP) - Emirates Airline said Sunday it will have to cut jobs after being forced to ground its fleet during the coronavirus crisis, but did not specify the extent of the layoffs.

The Dubai carrier, the largest in the Middle East, announced in March temporary cuts of between 25 percent and 50 percent in basic salaries for most employees after halting its operations.

It employs a workforce that is around 100,000-strong, with a fleet of 270 wide-bodied aircraft.

"We reviewed all possible scenarios in order to sustain our business operations, but we have come to the conclusion that we unfortunately have to say goodbye to a few of the wonderful people that worked with us," the airline said in a statement.

"We continuously are reassessing the situation and will have to adapt to this transitional period," it said.

"We do not view this lightly, and the company is doing everything possible to protect jobs wherever we can."

Emirates said on May 10 that it would take at least 18 months for travel demand to return to "a semblance of normality", even after reporting bumper pre-pandemic profits.

The carrier had suspended flights on March 22 before resuming some services two weeks later.

The International Air Transport Association forecast in April that air traffic in the Middle East and North Africa was set to tumble this year by more than a half.

IATA said that MENA airlines' revenues in 2020 will be slashed by $24.5 billion compared to last year, and warned the region's aviation shutdown threatened some 1.2 million jobs.

State-owned Kuwait Airways recently said it was laying off 1,500 expatriate employees, who make up a quarter of foreign staff.

Even before the coronavirus pandemic paralysed the aviation industry, Emirates, which transported 56 million passengers last year, had slimmed its orders from both Airbus and Boeing, cutting tens of billions of dollars worth of aircraft.

The airline industry plays a key role in making Dubai a global hub for tourism and transport.

Dubai government said in April it would inject fresh capital into Emirates to help it cope with the impact of coronavirus.