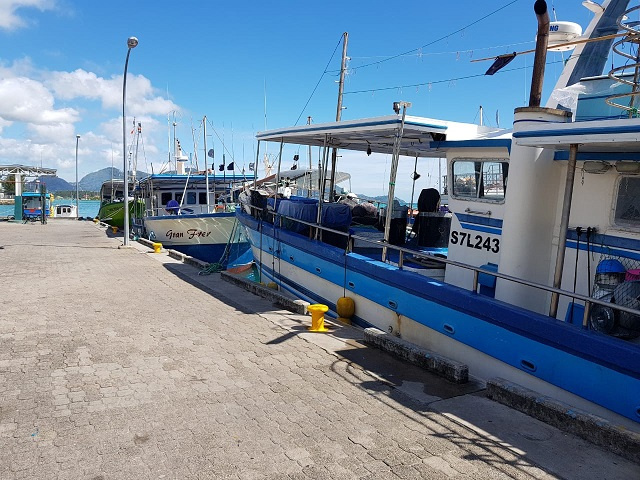 Since a travel ban was imposed to and out of Seychelles in March, some fishermen have been fishing and some not. (Seychelles News Agency)

The interim chief executive of the Seychelles Fisheries Authority (SFA), Cyril Bonnelame, said the authority is working with fishermen and exporters to help them find a market for their fish.

"We need to bear in mind that we will have limitations on what we can export. Some countries in Europe have started to reopen their borders and we are working closely with them to see how we can proceed with exporting our fish," said Bonnelame.

Bonnelame said that the authority is also looking at the price of freight, which has gone up, thus making the price of fish from Seychelles non-competitive in big international markets.

Since a travel ban was imposed to and out of Seychelles in March, some fishermen have been fishing and some not. Those who are doing so were able to have an arrangement with factory owners to sell their catch.

The semi-industrial sector comprises of the monofilament longline fishery operating around the Mahe plateaux. On average these vessels remain at sea for 10 days, preserving their catch on ice.

According to the SFA, there are around 30 vessels that are involved in semi-industrial fishing in the island nation.

A boat owner, Gino Lespoir, told the Seychelles Broadcasting Corporation (SBC) recently that for two months now he has not been able to go fishing as there was no outlet to sell his catch.

"The factories were not buying our catch as they were not able to export it due to restriction measures as well as because they were finding it hard to get an outlet also," said Lespoir.

However, Lespoir hopes that with the reopening of the airport "we would have some flights, and things would perhaps go back a little to normal so that those involved in semi-industrial fishing can survive."

Normally the majority of the catches were sold mostly to hotels and restaurants while some species were exported.

Another boat owner, Gaetan Payet, said that "we have been told that we have a limit of 120 fish that we can catch per trip, but we do not have control over this. Last week my boat docked with 200 fishes, and the factories bought them all."

Muditha Gunatilake, the owner of Marlu Seychelles, a fish exporter, said his company was depending a lot on flights by Etihad and Qatar Airways.

"Suddenly when the flights stopped we were not able to go fishing anymore as we could not export our fish. Then those countries importing our fish were affected as well and we saw many restaurants and hotels closing down," he added.

Gunatilake said his company is competing in terms of price on the global market and there are alternatives for export but the price for cargo is too high.

Marlu Seychelles started its operations in February and is exporting fish to Italy, Spain and UK, the United States and Holland.