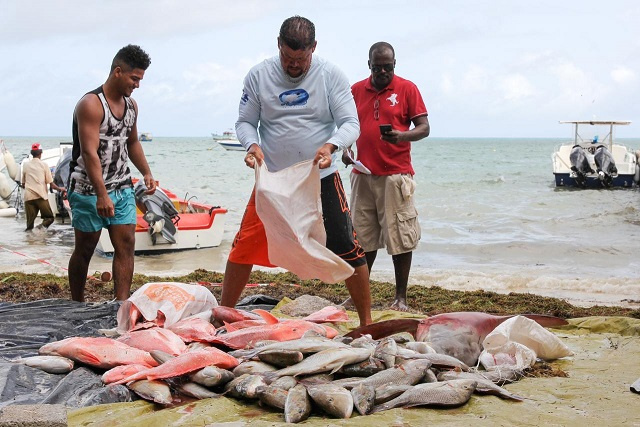 The actual catch over the last nearly seven decades was 1.5 times higher than the reported catch. (Romano Laurence)

(Seychelles News Agency) - There are discrepancies between the actual quantities and species of fish caught in Seychelles' waters and what is being reported by national and international regulatory bodies, a newly published report found.

In short, the actual catch over the last nearly seven decades was 1.5 times higher than the reported catch.

Sea Around Us is a research initiative at The University of British Columbia that assesses the impact of fisheries on the marine ecosystems of the world and offers mitigating solutions to a range of stakeholders.

"We reconstructed the total domestic catch for the archipelago and found that it was 1.5 times higher than the baseline reported by FAO (Food and Agriculture Organisation) on behalf of Seychelles from 1950 to 2017," said Christ, the lead author of the study.

The Sea Around Us conducts reconstructions of catch data by complementing official information submitted by countries to the FAO with estimates of unreported catches. The latter is obtained from peer-reviewed academic and grey literature, industrial fishing statistics, local fisheries experts and fisheries law enforcement. They also come from institutional reports, household and or nutritional surveys, and other records such as documentation of fish caught by tourists.

The researchers outlined that it is important to carry out comprehensive long-term monitoring of fisheries resource to properly deduce the status of the underlying fish populations and ecosystems. It also helps measure the impacts fishing has on these populations, or to figure out if fishing is sustainable at these levels in the long term.

The fisheries industry is the second-largest contributor to the economy of the 115-island archipelago of the western Indian Ocean after tourism.

"The Seychelles fisheries would benefit from refinement and increased frequency of current data collection systems, such as household surveys. This means that trends in "true" subsistence and take-home catch could be assessed by regular national surveys with questions regarding take-home catch and time spent fishing only for subsistence purposes," said Dirk Zeller, the director of the initiative

Zeller added that "annual fisheries reports should include information of all small-scale sectors, including non-commercial fisheries (recreational and subsistence)."

"Previous fisheries management plans which included detailed monitoring of recreational fisheries should be reactivated in future management plans and such estimates reported to FAO, ideally after adjustment for the present is bias,' he said.

Published on May 5, the research states that "domestic catches, here excluding large-scale industrial pelagic catches taken mostly by foreign companies for international markets, increased by over 500 percent throughout the time period, growing from less than 2,000 tonnes per year in the 1950s to over 11,000 tonnes in 2017."

Fisheries » Be a reporter: Write and send your article » Subscribe for news alert
Tags: University of Western Australia, University of British Columbia, Sea Around Us