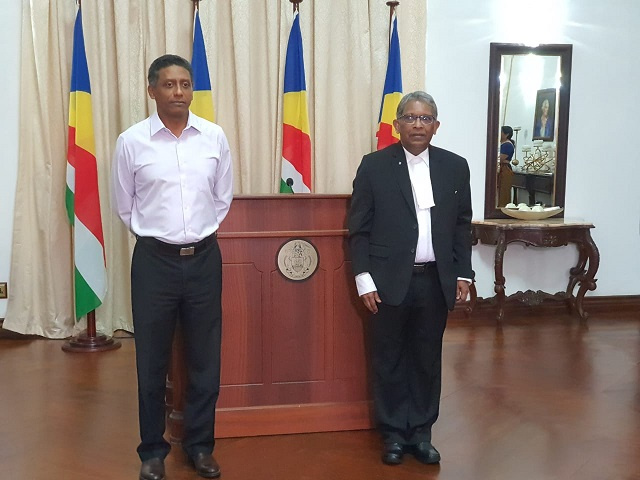 (Seychelles News Agency) - A Justice of Appeal, Anthony Fernando, was sworn in as the president of the Seychelles' Court of Appeal on Monday in a ceremony at State House.

Fernando was appointed by President Danny Faure following the recommendation of the Constitutional Appointments Authority.

Fernando who was the acting president of the Court of Appeal since April 1, succeeds Francis Macgregor, who retired in January.

Speaking to reporters, Fernando said, "I have been in the Court of Appeal for the last 10 years and I feel that my experience will allow me to do a good job in this role."

The new President of the Court of Appeal added that "I will do my best for the Court and for the country. We will try to dispose of as many cases as possible, but the most important thing is to maintain the independence and impartiality of the Court; I will strive for that without fear or favour."

Fernando who became a Seychellois citizen in 2011 holds a Bachelor Degree in Law from the University of Colombo. In 1992, he joined the Attorney General's Office of Seychelles as principal state counsel and later served as Attorney General from 1999 to 2009 when he was appointed Justice of the Court of Appeal.

In terms of delivering his new plan, Fernando said that "it will also depend on how we are able to deal with the COVID situation. As a result of the lockdown, we did not have our April session, whereby we had 25 cases to deal with.  Thus I am yet to strategise on our way forward."

The Court of Appeal generally has three sessions a year -- usually in April, August and December -- wherein it hears appeals and applications. Each session lasts two weeks. Usually, the court will pass judgment on all matters heard before it on the last day of a session.

Fernando said that for the time being they are short of two Justices of Appeal and they are yet to be appointed and will be ready for the next session set to take place in September.

Fernando is also a non-resident justice of the Court of Appeal of Fiji and Fernando said that this will not affect his work in Seychelles, a group of 115 islands in the western Indian Ocean.

General » Be a reporter: Write and send your article » Subscribe for news alert
Tags: Constitutional Appointments Authority, Court of Appeal, University of Colombo