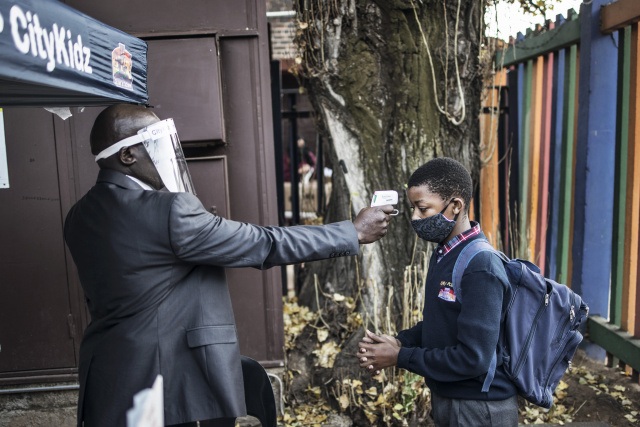 A pupil at the City Kidz Pre & Primary School in the Inner City district in Johannesburg has his temperature measured as he enters the school premises on June 1, 2020. South Africa moved into level three of a five-tier lockdown on June 1, 2020, to continue efforts to curb the spread of the COVID-19 coronavirus.
Under level three, all but high-risk sectors of the economy will be allowed to reopen.
There are however a lot of confusion around the reopening of schools as some schools have opened and others remain closed. (MARCO LONGARI / AFP)

(AFP) - A South African court on Tuesday ruled that certain coronavirus lockdown regulations were "unconstitutional and invalid" after a community group challenged the validity of the government's response to the pandemic last month.

The "Liberty Fighters Network" filed a legal challenge against the national state of disaster declared by President Cyril Ramaphosa at the start of South Africa's coronavirus outbreak in March.

Their case was heard in a provincial division of South Africa's High Court on May 28, after which some government-imposed lockdown regulations were declared "unconstitutional and invalid".

"The regulations promulgated in respect of alert levels 4 and 3... are not rationally connected to the objectives of slowing the rate of infection or limiting the spread thereof," said the judgement, which was delivered by the High Court in Pretoria on Tuesday and suspended for 14 days.

South Africa rolled out one of the world's strictest coronavirus lockdowns on March 27, shuttering almost all businesses and banning non-essential outings.

The five-tier system was eased down to level 4 on May 1 and level 3 on Monday, with more movement allowed and economic activity gradually resuming.

Several sticking points have sparked controversy, however, including a nine-week booze embargo and an ongoing ban on the sale of tobacco products.

Cabinet said it had "taken note" of the High Court judgement and its directive to "review, amend and republish the regulations, adding that the rule remained in place "for now".

South Africa has the continent's highest number of confirmed coronavirus cases, with more than 35,800 cases and at least 705 deaths recorded to date.

But the economic costs of the lockdown have been heavy, stoking frustrations against the government and disagreement between political parties.