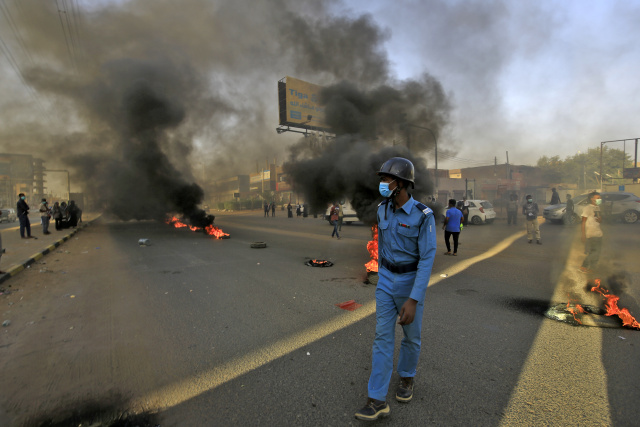 A mask-clad policeman walks near tires set aflame by Sudanese protesters marking the first anniversary of a raid on an anti-government sit-in, in the Riyadh district in the east of the capital Khartoum on June 3, 2020. Scores of protesters were killed when armed men in military fatigues stormed the sprawling encampment outside Khartoum's army headquarters on June 3 last year. (ASHRAF SHAZLY / AFP)

(AFP) - The UN Security Council on Wednesday unanimously adopted two resolutions to create a mission in Sudan to support the country's political transition and extend the mandate of peacekeepers in Darfur, diplomats said.

The resolution on the new United Nations Integrated Transition Assistance Mission in Sudan (UNITAMS) was drafted by Britain and Germany.

The mission was established "for an initial period of 12 months," according to the text of the resolution, seen by AFP.

The resolution asks Secretary General Antonio Guterres to quickly name an envoy to head up the new mission.

After the fall of long-time ruler Omar al-Bashir in April 2019, and several months of pro-democracy protests that were brutally suppressed, Sudan embarked on a political transition.

In August last year, a civilian-military transition authority was created to lead the transition for a period of three years.

Britain and Germany also drafted the resolution on renewing the mandate of the African Union-United Nations Hybrid Operation in Darfur (UNAMID) through December 31.

The text, seen by AFP, also calls for the force's current strength of roughly 8,000 Blue Helmets to be maintained.

In a joint report in March, the UN and the African Union however had recommended that the UNAMID be replaced by a political mission in late October, and called for the peacekeepers to be gradually withdrawn by that time.

China, Russia and several African countries had supported that plan, but European nations and non-governmental organizations feared that civilians would be left unprotected should tensions spike.

"In Darfur, armed violence between rebel groups has declined, but the fundamental conflict drivers remain unresolved and exacerbate intercommunal tensions," the report said.

"It's good news that the Council is keeping armed peacekeepers in Darfur through the end of the year, but what happens after that?" Jehanne Henry, associate Africa director at Human Rights Watch, told AFP.

"We'll need to keep our eyes on civilians there, who remain on the frontlines for attack."

UNAMID has been deployed in Darfur, in western Sudan, since 2007 and has deployed up to 16,000 peacekeepers.

According to the UN, the conflict in Darfur between Sudanese forces and ethnic minority rebels who consider themselves marginalized by the central government, has resulted in about 300,000 deaths and more than 2.5 million displaced people since 2003.