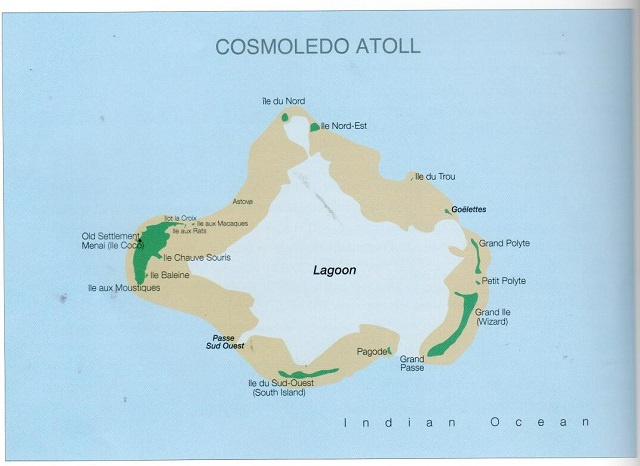 For the first time, a seasonal delicacy in Seychelles – bird eggs – will be collected from another island instead of Desnoeufs where this activity was traditionally done. Instead, they will be collected from Cosmoledo, an atoll situated in the Aldabra group. It lies 1,045 kilometres southwest of Victoria – the capital city - of the main island of Mahe.
Cosmoledo is an outer island of the 115 islands in the western Indian Ocean which makes up the Seychelles archipelago. SNA presents five intriguing facts about Cosmoledo which is managed by the Islands Development Company (IDC).
History
The name Cosmoledo is reported to be in honour of a Portuguese navigator, Antonio Goncalves Cosme Ledo.  The atoll constitutes of 26 smaller islands and islets with unfamiliar names such as Wizard and Menai – named after British vessels of the Moresby expedition in 1822.
In 1874, after a wreck, the atoll received its first inhabitants, though the island was frequented by fishermen and whalers in the years prior. Cosmoledo was permanently settled around 1880.
Economic activities.
Whilst for many years the main activity on the island was fishing, in early 1900, one of the islands of the atoll was exploited for guano. The forest of mangroves was also exploited where its bark was dried for exportation.
But since the 1960s Cosmoledo was used as a fishing and turtling station where activities which took place included salting of fish, sea birds and turtle meat. These activities stopped in 1992 and the settlement was abandoned.
Flora and Fauna
The main inhabitants of the atoll are thousands of sea and land birds. Cosmoledo is, therefore, an important bird area due mainly to globally significant populations of seabirds. It holds Seychelles' largest colonies of all three species of booby that breed on the islands. These include Brown booby and the Red Footed booby as well as other species such as the Lesser Noddy and the Sooty Tern.
The flora is similar to that of Aldabra – a UNESCO World Heritage Site - with its large mangrove forest, and including several plants such as bwadamann and bwazak endemic to the group.
Intriguing and mysterious tales.
On Menai - the largest island - there is an abandoned village with a cemetery. An interesting story is that some of the graves there are empty.  As the island is well known for wreckages and drownings. It was said that the island’s registrar would have an empty coffin buried for the persons lost at sea.
Cosmoledo is also reported to have buried treasures though these riches have not been found yet. Another story is that a Captain Cauvin - possible drowned at sea - haunts the island.
Cosmoledo and tourism
Cosmoledo has gained a reputation for the fishery in the world for Giant Trevally. The GT - as it is known to fly-fishermen - has been likened to a hybrid of Pit Bull Terrier and Jack Russell. Fish up to 130 pounds are caught on fly with Bonefish, Yellowfin Tuna and Milkfish among prey species.
Since 2018, a temporary eco-lodge has been set up on Wizard Island (Grand Ile) in the south-east of the atoll. The facility does not only focus on fly fishing guests but is also for eco-oriented persons who are interested in a 'back to basics' safari experience. The reefs are also spectacular and offer some of the best diving experience of the island nation.
Seychelles Buzz » Be a reporter: Write and send your article » Subscribe for news alert