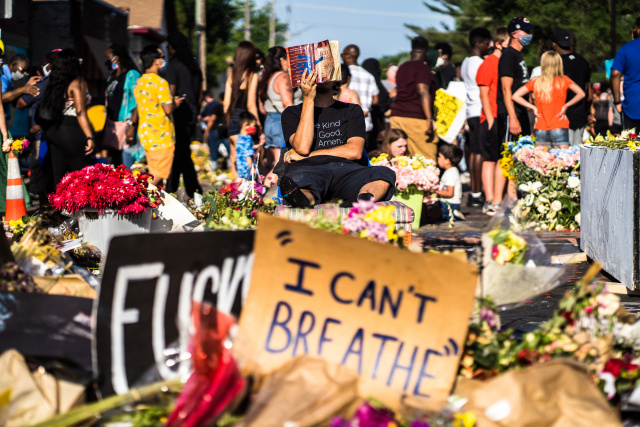 A man sits among flowers and signs and reads the bible at a memorial for George Floyd following a day of demonstrations on June 7, 2020 in Minneapolis, Minnesota. Demonstrations are being held across the US following the death of George Floyd on May 25, 2020 in police custody. (Kerem Yucel / AFP)

(AFP) - Calling for racial justice, protesters rallied across Europe Sunday, joining a wave of demonstrations sparked by the death of African American George Floyd at the hands of US police.

A video of the incident with Floyd pleading for his life in Minneapolis as a white police officer knelt on his neck has sparked protests worldwide, even as countries continue to discourage large gatherings to curb the coronavirus pandemic.

Several thousand people massed outside the US embassy in Madrid, shouting "I can't breathe", Floyd's last words, and demanding justice.

"Racism knows no borders," said Leinisa Seemdo, a 26-year-old Spanish translator from Cape Verde. "In all the countries where I have lived, I have experienced discrimination because of the colour of my skin."

Rome's Piazza del Popolo ("People's Plaza") fell silent for eight minutes -- roughly the time the policeman pressed his knee on Floyd's neck -- as thousands of people took a knee in memory of Floyd, their fists in the air.

"We can't breathe," shouted the crowd, after the collective silence.

"It's really hard to live here," said Senegalese migrant Morikeba Samate, 32, one of the thousands to have arrived in Italy after risking the perilous crossing across the Mediterranean.

Opposition to that wave of migration buoyed the far-right in Italy and elsewhere in Europe.

Floyd's death last month has unleashed the most serious and widespread civil unrest in the United States since Martin Luther King was assassinated in 1968.

More than 1,000 people on Sunday also gathered at a Black Lives Matter protest near the US embassy in Budapest.

Hungarian reggae singer G Ras told cheering protesters: "If we want to live in a better world, we need to radically change the way we live."

Almost 4,000 attended two similar events in the Netherlands, while thousands marched in cities across Britain.

Hip-hop artist Stormzy joined protesters marching for a second day running in London despite a ban against large gatherings during the coronavirus.

For the second day running, some demonstrators scuffled with police near Downing Street. There were also clashes outside the US embassy.

Prime Minister Boris Johnson tweeted: "These demonstrations have been subverted by thuggery -- and they are a betrayal of the cause they purport to serve. Those responsible will be held to account."

In Bristol, a city linked to the slave trade, the statue of trader Edward Colston was torn down Sunday and thrown into the harbour.

In Lausanne, Switzerland, a black-clad demonstrator's placard read: "my colour is not a threat".

Some protesters there carried placards with the name of 40-year-old Nigerian Mike Ben Peter, who died while being arrested by the city's police two years ago

Almost 10,000 people marched in Brussels, police said. "The murder of George Floyd has clearly woken up a lot of people," said Ange Kaze of the Belgian Network for Black Lives.

After the demonstration, police arrested around 150 people for vandalism, which the city's mayor, Philippe Close, blamed on "troublemakers and delinquents". Close had authorised the march against the advice of Prime Minister Sophie Wilmes.

A demonstration by 15,000 in Copenhagen ended peacefully.

But there was fighting reported at the end of a protest in Goteborg, Sweden, were almost 2,000 people turned out for a march authorised for just 50 owing to coronavirus restrictions.

Governments are struggling to balance people's need to express their anger, against the risk of protests spreading a disease that has killed more than 400,000 worldwide.

In France, more than 23,000 people demonstrated on Saturday, and football players from a half dozen German teams knelt over the weekend in Floyd's memory.

His death occurred during a pandemic that has disproportionately affected black people and ethnic minorities in mega cities such as London, New York and Rio de Janeiro.

The historic economic recession triggered by virus lockdowns has hammered the poor and marginalised even more.

A combination of economic woes, social tensions and anger at US President Donald Trump's response has refocused attention on racial divides like few other events since the 1960s.

General » Be a reporter: Write and send your article » Subscribe for news alert
Tags: US, politics, race