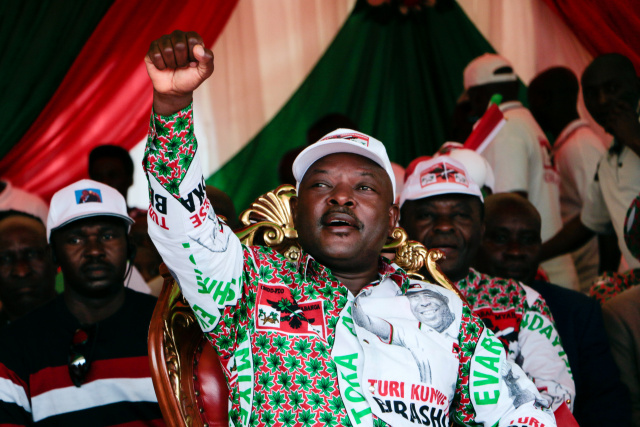 FILES) In this file photo taken on May 16, 2020 Burundi’s incumbent president Pierre Nkurunziza raises his fist as he reacts to supporters during the last campaign rally of the candidate of the ruling party the National Council for the Defense of Democracy - Forces for the Defense of Democracy (CNDD-FDD), in Bujumbura, ahead of Burundi's presidential and general elections scheduled for May 20, 2020, despite the COVID-19 (novel coronavirus) pandemic. The Burundian president, Pierre Nkurunziza, died on June 8, 2020 at the age of 55 the Burundian presidency announced on June 9, 2020 in a statement. (AFP)

(AFP) - Burundian President Pierre Nkurunziza has died of heart failure, the government said Tuesday, just months before he was to step down after 15 turbulent years at the head of the troubled nation.

Nkurunziza, 55, first began to feel unwell after attending a volleyball match on Saturday, and appeared to be improving until he took a turn for the worse on Monday and his heart stopped, the presidency said in a statement.

"Despite intense efforts, the medical team was not able to save the patient," said the statement, adding that doctors had spent several hours trying to revive him.

A post on the government's official Twitter account early Tuesday evening announced Nkurunziza's death "with great sadness", and a statement from the presidency said he died in a hospital in the eastern city of Karuzi.

Many Burundians heard the news via a statement read out on national television and radio, which disrupted its programming to broadcast religious songs in Kirundi, the national language.

Nkurunziza's wife, first lady Denise Bucumi, is currently recovering from the coronavirus in a Nairobi hospital after being evacuated late last month.

Nkurunziza's death comes as he was preparing to leave office following the election last month of his hand-picked successor Evariste Ndayishimiye.

In a Twitter post Tuesday night, Ndayishimiye praised Nkurunziza's "legacy" and vowed to "continue his high-quality work that he has done for our country, Burundi".

An evangelical Christian who believed he was chosen by God to rule the East African nation, Nkurunziza was elected by parliament in 2005 at the tail end of a brutal civil war. He was re-elected in 2010.

In 2015, his decision to run for a third term sparked outrage among the opposition who claimed it was unconstitutional, leading to protests and a failed coup which plunged the country into violence.

At least 1,200 people were killed and some 400,000 fled the country, and following Nkurunziza's successful election, a climate of fear prevailed with rights groups regularly denouncing a crackdown on the opposition and media.

Burundi, which the World Bank ranks among the world's three poorest countries, has been under sanctions from its major donors since then.

Nkurunziza exacerbated the country's international isolation by withdrawing from the International Criminal Court in 2017, and last year he shut down a local United Nations rights office which was probing killings, enforced disappearances and other rights abuses in the country.

Nkurunziza had come in for heavy criticism over his handling of the pandemic and his claims God had protected Burundi from its worst ravages.

Officially Burundi has recorded 83 cases and one death, however doctors in Bujumbura speaking to AFP on condition of anonymity say many cases and deaths are going unreported.

"If all over the world we talk about the coronavirus pandemic, but we were able to gather without any problem, hold an electoral campaign without any problem, send our children to school and go to the market without worries... it is the hand of God which shows he has placed a special sign above our Burundi," Nkurunziza said last month.

Kenyan President Uhuru Kenyatta and Ethiopian Prime Minister Abiy Ahmed were among the first world leaders to express their condolences Tuesday evening, with Kenyatta hailing Nkurunziza's "contribution to the integration and progress of the region".

The country remains under the tight control of the ruling CNDD-FDD political party and its notoriously violent youth league, the Imbonerakure, which the United Nations has described as a militia.

In May 2018, Burundi approved in a referendum constitutional reforms that would have enabled Nkurunziza to rule until 2034, after a campaign Human Rights Watch said was marked by widespread repression and abuses.

But in a surprise move, Nkurunziza announced the following month that he would not run again.

His death comes on the heels of elections on May 20 that saw Ndayishimiye secure a seven-year term as president -- a result confirmed by the constitutional court last Thursday.

Ndayishimiye was due to be sworn in in August.

Julien Nimubona, a Burundian political scientist, told AFP Tuesday that the president of the National Assembly, Pascal Nyabenda, should take over on an interim basis before Ndayishimiye's swearing-in, in accordance with Burundi's constitution.

Like Ndayishimiye, Nkurunziza fought for the ethnic Hutu rebellion during the country's 1993-2006 civil war with the minority Tutsi-dominated army. The war left some 300,000 dead.

The ruling party granted him the title of "visionary" earlier this year.

Tuesday's statement from the presidency said the country would observe seven days of mourning to mark his death.