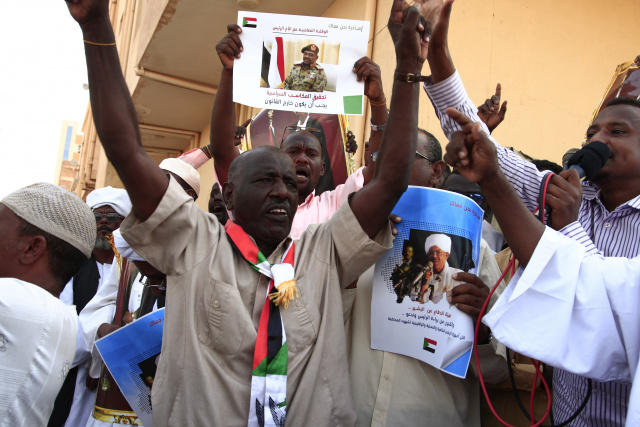 Supporters of Sudan's ousted president Omar Bashir gesture as they demonstrate during his trial in front of the court in the capital Khartoum on November 16, 2019. Bashir who was overthrown by the army in April, is on trial in a Khartoum court since August on charges of illegally acquiring and using foreign funds. He is also wanted by the International Criminal Court for his alleged role in the Darfur war that broke out in 2003, and his supporters vowed to oppose any move by Sudan's new authorities to hand him over to the ICC.(Ebrahim HAMID / AFP)

(AFP) - The International Criminal Court called on Wednesday for Sudanese war crimes suspects to turn themselves in, just a day after longtime fugitive militiaman Ali Kushayb surrendered to The Hague.

ICC lawyer Fatou Bensouda said during a United Nations Security Council videoconference that Kushayb -- who is suspected of crimes against humanity in Darfur -- "was transferred to the court following his surrender" in the Central African Republic.

Bensouda congratulated Chad, France, the Netherlands and the UN mission in the Central African Republic but did not offer any other details about Kushayb's arrest.

"There should be no escape from justice for perpetrators of the world's most serious crimes under international law," she said, calling on others to surrender themselves.

"I take this opportunity to call Abdallah Banda and all the ICC suspects to surrender to the ICC and answer the charges against them through a fair, objective and independent judicial process."

Kushayb has been wanted by international law enforcement since 2007 for his role as head of the Janjaweed militia.

He is also a former close ally of ousted Sudanese president Omar al-Bashir, himself wanted by the ICC and currently detained in Khartoum.

Abdallah Banda has been wanted for war crimes since 2019 by the ICC, which is also searching for two other individuals related to the case.

The Security Council members who helped found the ICC (Belgium, Dominican Republic, Estonia, France, Germany, Nigeria, St. Vincent and the Grenadines, South Africa, Tunisia and Britain) in a joint statement underlined their commitment to fighting against impunity from war crimes.

"We reiterate our commitment to uphold and defend the principles and values enshrined in the Rome Statute and to preserve its integrity undeterred by any threats against the Court, its officials and those cooperating with it," the statement said.

The United States is not a member of the ICC and Russia resigned from the group in 2016.