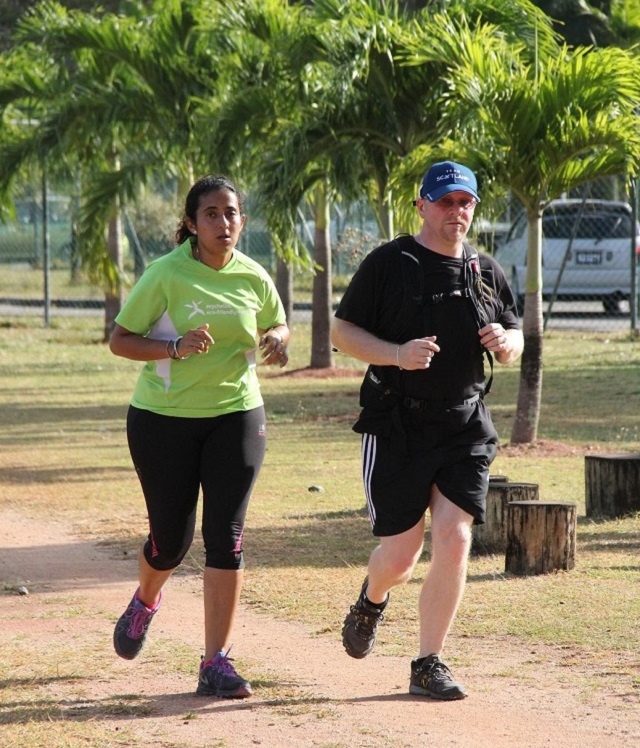 Rousseau said that many people who run regularly were already sending their results but the virtual race will make it more coordinated and official. (Patrick Joubert)

(Seychelles News Agency) - People who run or walk as a form of exercise can now monitor their progress through a virtual race platform set up by the eco-friendly marathon committee in Seychelles.

The eco-friendly race director, Giovanna Rousseau, told SNA on Wednesday that the virtual race is to motivate those who used to participate in local races which are no longer being organised due to the COVID-19 pandemic.

"People are calling to ask when are we going to start with our races and since up to now we have not received feedback as to when we can organise a race and with the COVID-19 situation we knew it will take a while. So we sat down and thought especially as many countries are doing virtual races we thought we will do it for people here," said Rousseau.

Unlike organised races, the virtual one is easier for participants as they chose where what distance and which day to run or walk and simply record their results on a day of their choice and send to the organiser. As the race is virtual, anybody anywhere in the world can participate.

People who want to join the virtual race have to send their names and date of birth by email to seymarathon@seychelles.net or call 2722333/4325555 or message via Facebook page of Seychelles Eco-Friendly marathon. The race is opened for the whole month of June.

For those who do not know where to race or walk, the committee has made available several courses on its Facebook page.

"For example if you live at Beau-Bel in the north of Mahe and if we've put a race from Beau Vallon Beach hotel to La Scala, a person can run anywhere along this road. The race distance is 3 to 5 kilometres," said Rousseau.

She added that many people who run regularly were already sending their results but the virtual race will make it more coordinated and official.

"Most of them run every day and some three times a week. So if they take one day where they want to do their competition and then send us their results, we will publish them. It becomes a sort of motivation for them instead of them just running," she said.

"For example, I have a man who ran 10 km in 39 minutes and is very happy with this result. It was one of his dreams to do below 40 minutes. His result is recorded and published and for him this is his personal best," added Rousseau.

For those who exercise using a treadmill, they can also time their race and send their results.

Rousseau said the question many have asked is what happens when those who cannot prove where and how long they run, give the wrong information.

"You are cheating yourself because this is a personal thing and you are doing it for yourself. Every week we publish the results of those participating in the virtual race so every week people will be able to see the weekly results. Participants can therefore see their progress," she added.

If there are many participants in the virtual race this month, the organisers say the race will be extended to end of July.