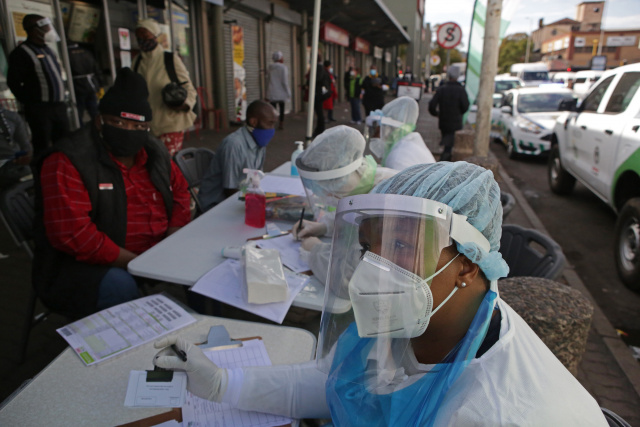 A City of Tshwane Health official looks on as she conducts a screening exercise on a taxi operator before testing for the COVID-19 coronavirus at the Bloed Street Mall in Pretoria Central Business District, on June 11, 2020. (Phill Magakoe / AFP)

(AFP) - South Africa's confirmed coronavirus infections have jumped by more than 10,000 in five days to 61,927 on Friday, official statistics showed.

South Africa accounts for nearly 25 percent of the continent's total cases, according to the World Health Organization.

The latest figures released by the health ministry showed that the virus has so far killed 1,354 people in the country since the first case was detected in March.

Most of South Africa's infections -- around two-thirds -- are found in the Western Cape province, a popular tourist destination home to the coastal city of Cape Town.

Africa » Be a reporter: Write and send your article » Subscribe for news alert
Tags: health, virus