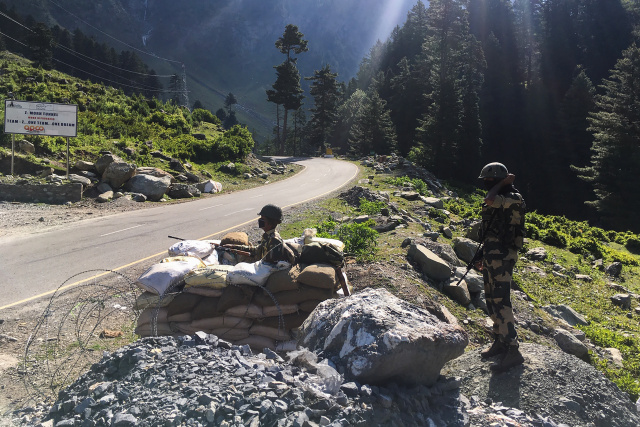 Indian Border Security Force (BSF) soldiers guard a highway leading towards Leh, bordering China, in Gagangir on June 17, 2020. The long-running border dispute between Asian nuclear powers India and China turned deadly for the first time in nearly half a century after at least 20 Indian soldiers were killed in a "violent face-off", the army said on June 16. (Tauseef MUSTAFA / AFP)

(AFP) - Twenty Indian soldiers were killed during "hand-to-hand' fighting with Chinese troops in a disputed Himalayan region, India's military said, the first deadly clash between the nuclear powers in decades.

Both sides blamed the other for Monday's violence, which followed weeks of rising tensions over their competing territorial claims, with thousands of extra troops deployed.

The clashes reportedly involved intense fighting and no gunfire, in line with longstanding tactics to avoid a full military battle over the disputed 3,500-kilometre (2,200-mile) border.

An Indian army source told AFP there was no shooting but there were "violent hand-to-hand scuffles".

The fighting occurred in the precipitous, rocky terrain of the strategically important Galwan Valley, which lies between China's Tibet and India's Ladakh.

The soldiers threw punches and stones at each other, with Chinese troops allegedly attacking their Indian counterparts with rods and nail-studded clubs during the more than six-hour fight, the Hindustan Times reported.

India initially said three of its troops had died, and that there were "casualties on both sides".

But in a statement late Tuesday the army added 17 more critically injured were "exposed to sub-zero temperatures... (and) succumbed to their injuries".

China's defence ministry confirmed the incident had resulted in casualties but did not give the nationality of the victims or any other details.

Both sides gave competing versions of the violence.

But Indian foreign ministry spokesman Anurag Srivastava said the clash arose from "an attempt by the Chinese side to unilaterally change the status quo" on the border.

While the incident dominated the free-wheeling Indian press, China's state-controlled media played down or ignored it, in keeping with Beijing's low-key public response.

CCTV's widely watched evening news broadcast made no mention of the border confrontation on Tuesday.

"China does not want to turn border issues with India into a confrontation," the Global Times, a nationalist Chinese tabloid said in an editorial on Wednesday, although it blasted India for "arrogance and recklessness".

The United States -- which has mounting frictions with China, but sees India as an emerging ally -- said it was hoping for a "peaceful resolution", and that it was monitoring the situation closely.

The UN called for both sides to "exercise maximum restraint".

India and China have never even agreed on the length of their "Line of Actual Control" frontier, and each side uses different frontier proposals made by Britain to China in the 19th century to back their claims.

They fought a brief war in 1962 in which China took territory from India. Further deadly clashes followed in 1967, but the last shot fired in anger was in 1975, when four Indian soldiers were ambushed and killed along the dividing line in Arunachal Pradesh.

In 2017 there was a 72-day showdown after Chinese forces moved into the disputed Doklam plateau on the China-India-Bhutan border.

The recent uptick in tensions began on May 9, when several Indian and Chinese soldiers were injured in a clash involving fists and stone-throwing at Naku La in India's Sikkim state, which borders Bhutan, Nepal and China.

China said last week it had reached a "positive consensus" with India over resolving tensions at the border, while New Delhi also sounded conciliatory.

However, Indian sources and news reports suggested that Chinese troops remained in parts of the Galwan Valley and of the northern shore of the Pangong Tso lake that it occupied in recent weeks.

The prickly relationship had already been strained when India in August revoked the semi-autonomous status of Jammu and Kashmir state.

That saw the Ladakh region -- partly claimed by Beijing -- turned into a separate Indian administrative territory.