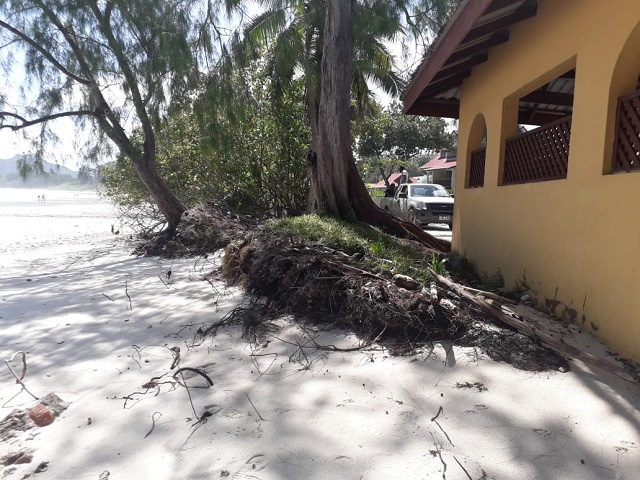 Côte D'Or on Praslin is one of the 4 sites chosen for the study. (Climate Change Division)

(Seychelles News Agency) - The World Bank is assisting Seychelles with technical support for the island nation to implement its $15 million coastal management and erosion plan. The plan – a first of its kind for the islands – will allow better measures to address hazards brought about by climate change affecting its coastal zones.

The Principal Secretary for Energy and Climate Change Wills Agricole told SNA this week that the World Bank is assisting with coastal studies at four different locations on the main island of Mahe and the second most populated island of Praslin.

"The four sites are namely Beau Vallon, Au Cap, Côte D'Or, and Anse Kerlan and they will assist us to come up with a sustainable methodology of coastal protection of these sites. The study is being undertaken this month," said Agricole.

According to Agricole the plan was developed in consultation with all stakeholders to enhance understanding about the risks that are associated with climate change and development pressures around the coastal zones.

"The plan takes into consideration existing studies that focus on coastal hazards relating to overtopping, sea-level rise and flooding along the shoreline in Seychelles plus nature-based solutions," said Agricole.

Already there are a number of coastal rehabilitation and protection projects being done on Mahe, Praslin and La Digue – the three main islands of the 115-island archipelago in the western Indian Ocean.

The island nation is also pushing for key sectors and government departments to mainstream climate change in their policies, programmes, and masterplans. This has come now that a new National Climate Change Policy - A sustainable, climate resilient and low-carbon Seychelles - was approved by the cabinet of ministers last month.

"Climate change should not be seen as an isolated and stand-alone issue but one which is cross-cutting and interlinked to the economy, society and the environment," explained Agricole, who added "issues of a cross-cutting nature requires a different policy approach to those normally applied to single sector policy issues."

The policy also makes provision for the establishment of a National Climate Change Council which is a coordination mechanism chaired by the vice-president and will have a secretariat to support it. The council will have several responsibilities including to ensure harmonisation between the various development policies, strategies, interventions, indicators with the National Climate Change Policy.

"Climate Change is the most urgent issue humans face. A very strong global advocacy is needed to raise awareness in the world and highlight how it threatens our collective futures especially in Seychelles – a Small Island Developing State. It costs us a lot of rock armouring to protect coastal line, drainage systems to prevent flooding and elevation of roads as the main ones are found on the coast," Dothy Valmont-Raforme, an entrepreneur, told SNA.

"Seychelles remains a frontrunner in the fields of climate change mitigation and adaptation actions and measures with the help of its development partners such as UNDP, EU, and the World Bank," said Agricole.

The PS added that the World Bank is also assisting Seychelles to also find international financial institutions to implement the 18 priority projects under the coastal management and coastal erosion plan.