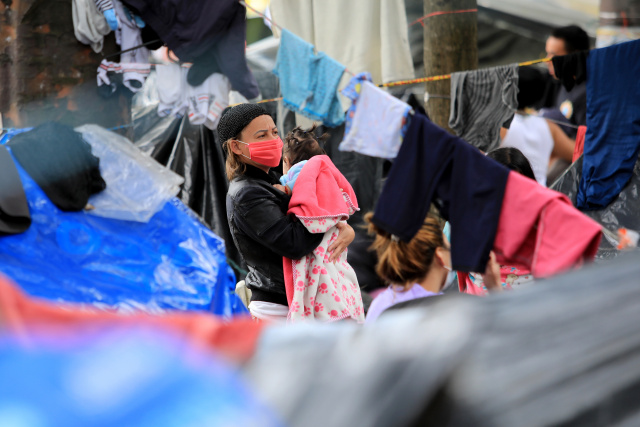 A woman carries her baby at a makeshift camp where jobless and homeless Venezuelan migrants remain during the COVID-19 cooronavirus pandemic in Bogota, on June 16, 2020. Venezuelan President Nicolas Maduro announced last week restrictions for Venezuelans wanting to return to their country from Colombia, limiting the returnees to 300 people per week. (DANIEL MUNOZ / AFP)

(AFP) - Nearly 80 million people have been forced to flee their homes due to violence and persecution, marking a near-doubling of global displacement in a decade, the UN said Thursday.

By the end of 2019, one out of every 97 people in the world was living uprooted and displaced, according to a fresh report by the United Nations refugee agency, highlighting swelling displacement from conflicts in places like Syria and the Democratic Republic of Congo.

"One percent of the world population cannot go back to their homes because there are wars, persecution, human rights violations, and other forms of violence," UN refugee chief Filippo Grandi told AFP in an interview.

The UNHCR agency found that by the end of last year, a record 79.5 million people were living either as refugees, asylum seekers or in so-called internal displacement within their own countries, marking a dramatic increase of nearly nine million from a year earlier.

It also means, he said, "that there have been insufficient political solutions" to the conflicts and crises that would allow people to return home.

Grandi pointed out that 10 years ago, the number of people living in displacement around the global stood at around 40 million.

"So it has basically doubled. And we don't see this trend diminishing," he said.

"With the international community so divided, so unable, so incapable of making peace, unfortunately the situation won't stop growing, and I am very worried that next year it will be even worse than this year."

Thursday's report showed that at the end of 2019, nearly 46 million of those displaced remained inside their own country, while 26 million had fled across borders as refugees.

Last year, some 11 million people were newly displaced, many in a handful of conflict-wracked countries and regions, the report showed.

They include Syria, which after more than nine years of civil war counts 13.2 million people displaced either inside or outside the country -- a full sixth of the global total.

This, he stressed, "means that if the international community found the unity, the political will and the resources to help these countries get out of crisis and rebuild, most likely we would have solved well over half of the world (refugee) problem."

The report did not address the evolving displacement situation since the global coronavirus pandemic struck.

Grandi said it was clear the crisis was complicating the situation for the displaced at a time when everyone is being told that "being on the move is a liability for yourself and for others."

But he pointed out that the poor and middle-income countries that host around 85 percent of the world's refugees had so far been relatively spared the worst health impacts of the pandemic.

However, he warned, the economic impacts were taking a dire toll.

"What we have really seen escalating dramatically is poverty," he said, pointing out that lockdowns in many countries had eliminated any chance most displaced people have of making an income.

Without significant support for displaced people and their host communities, this could spark "further population movements", he warned.

Grandi also reiterated that countries must continue granting asylum to those in need, despite border closures and lockdown measures.

"One activity that doesn't seem to have been discouraged by the pandemic is war, or conflict or violence," he said.

"Unfortunately people continue to flee their homes, because pandemic or not, they are at risk... and they need to continue to be given refuge, protection, asylum."

General » Be a reporter: Write and send your article » Subscribe for news alert
Tags: UN, migrants